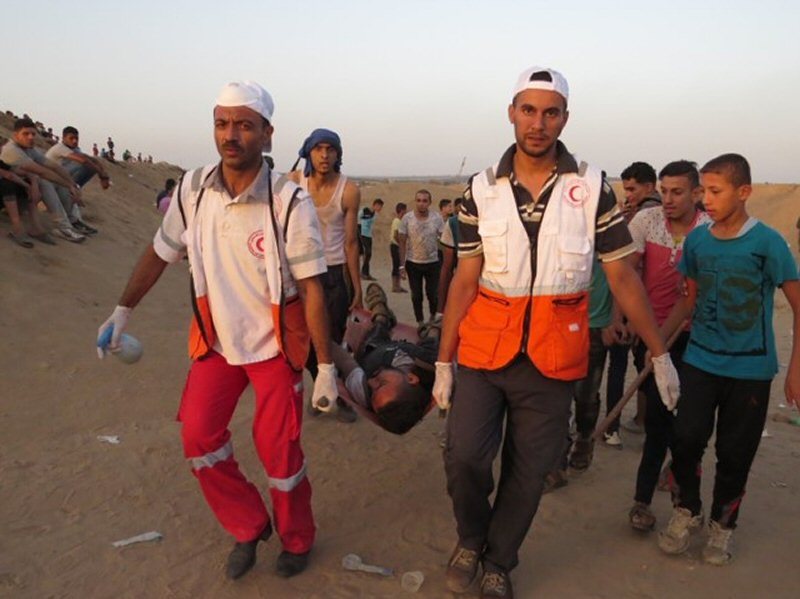 Israeli forces continued with systematic crimes in the occupied Palestinian territory (oPt) for the week of 21 – 27 June, 2018.

Israeli warplanes launched 13 missiles against a number of targets in the Gaza Strip.

In the Gaza Strip, on 22 June 2018, the Israeli forces killed Usamah Abu Khater (29) with a bullet to the chest during his participation in the protests organized in eastern Khuza’ah village, east of Khan Younis in the southern Gaza Strip.  After his injury, he was taken to the European Gaza Hospital in the city and admitted to the Intensive Care Unit (ICU) where he stayed until his death was declared on 24 June 2019.

During the reporting period, while using the excessive force against the peaceful protesters along the Gaza Strip borders, the Israeli forces wounded 84 Palestinians, including 11 children, 2 women, a paramedic, and a journalist.  Ten of those wounded sustained serious wounds.

As part of the collective punishment policy adopted by the Israeli forces against the Palestinian families of those accused of carrying out attacks against them and/or the settlers, on Thursday early morning, 21 June 2018, the Israeli forces demolished the external and internal walls of the apartment in Eastern Barta’ah village, southwest of Jenin, that is isolated behind the annexation wall.  The 140-square-meter apartment belongs to Ratib Qabha and is inhabited by his daughter (35) and her child.  It should be noted that the Israeli forces arrested the son of the abovementioned civilian, ‘Alaa’ (26), on 16 March 2018 after he was shot and wounded due to running over a number of soldiers stationed at the checkpoint near former “Mavo Dotan” camp, south of Jenin.

As part of demolishing civilian facilities, on 25 June 2018, the Israeli municipality vehicles demolished 5 agricultural dunums belonging to 5 Palestinian civilians in Hizmah village, northeast of occupied East Jerusalem. They demolished 3 glasshouse nurseries and a store for selling sheds under the pretext of non-licensing. The losses were estimated at hundred thousands of shekels, which is the only source of income for the owners. It

In the same context, the Israeli Municipality forced al-Showaki Family to self-demolish their house in Was Yasoul neighbourhood in Silwan village, south of occupied East Jerusalem’s Old City under the pretext of non-licensing.  Wael al-Showaiki said to PCHR’s fieldworker that his family and he were forced to demolished 2 under-construction houses to avoid paying NIS 90,000 as the municipality staff told them. Wael said that the 2 houses cost him around NIS 40.000.

In the same context, Ibrahim ‘Amirah self-demolished his house in Sur baher village, south of occupied East Jerusalem. The house was built 2 years ago and comprised of 4 rooms, kitchen and bathroom sheltering 6 individuals, including 4 children. He said that when the demolition decision was issued, he immediately headed to the Israeli Courts, but unfortunately all courts decided to demolish the house. Thus, he was forced to self-demolish his house to avoid paying fines that may reach over NIS 90,000.

At approximately 07:00 on Monday, 25 June 2018, Israeli vehicles demolished 5 agriculural dunums belonging to 5 Palestinian civilians in Hizmah village, northeast of occupied East Jerusalem. The Hizmah village’s mayor Samar Salah al-Deen said that the Israeli Municipality staff accompanied with many Israeli forces and vehicles moved into the village in the morning. These forces closed all streets leading to ‘Anatah village and declared it as a closed military zone. Following that, the Israeli vehicles demolished 3 glasshouse nurseries and a shop for selling sheds established on an area of 5 dumuns  under the pretext of non-licensing. Those facilities belonged to Ibrahim Salem, Ghaleb Salem, Mohamed al-Sewari, Mohamed Fayiz, and Mohamed ‘Askar. The mayor said that the Israeli vehicles not only demolished but also intentionally damaged the glasshouse nurseries to prevent civilians from reusing them again. The losses of those facilties’ owners were estimated at thousands shekels, noting they are the only source of income for the owners. It should be noted that the Israeli forces previously demolished those facilities several times.

In the same context, Ibrahim ‘Omairah self-demolished his house in Surbaher village, south of occupied East Jerusalem. The house was built 2 years ago, and when Ibrahim’s family finished its construction and lived there, the Israeli Municipality issued a decision to demolish the house. During the past period, Ibrahim attempted to license the house, but in vain. He said to PCHR’s fieldworker that:

“I received a phone call from the police, informing me that the Israeli Municipality will demolish the house on Tuesday morning or I immediately self- demolish it. I then vacated my house contents and self-demolished it. The house was comprised of 4 rooms, a kitchen and bathroom, sheltering 6 members, including 4 children. When the demolition decision was issued, I immediately resorted to the Israeli Courts, including the Supreme Court, but unfortunately all courts decided to demolish the house. Additionally, the component authorities refused to license the house, rendering my family and me homeless. I self-demolished my house to avoid paying fines that may reach over NIS 90,000.”

On Tuesday, 26 June 2018, the Israeli Municipality vehicles demolished a house belonging to ‘Izzat ‘Abed al-Qader in Tal’et Hizmah area in Beit Huninah neighborhood, north of occupied East Jerusalem, under the pretext of non-licensing. ‘Izzat said that the Israeli forces surrounded his house and then completely demolished it. He also said that the municipality staff raided his house in the previous day and handed him a decision to vacate the house contents. The 90-square-meter house was built near his family house in 2000 and sheltering his wife and their child.

In the same context, the Israeli Municipality vehicles demolished a 100-meter steel fence in al-Hardoub area in al-Tour neighborhood, east of occupied East Jerusalem’s Old City. An eyewitness said that the plot of land belonging to Murad Abu Subitan and Hani al-Sayyad.

In Wadi Helwa neighborhood in Silwan village, south of occupied East Jerusalem’s Old City, the Israeli Municipality demolished a parking belonging to Eyad Ramadan. Eyad said that the Israeli Municipality forced him in last April to self-demolish the parking roof and parts of its walls. On the same day, Eyad was surprised with raiding the parking and completely demolishing it.

In al-Issawiyia village, northeast of occupied East Jerusalem, the Israeli Municipality demolished agricultural roads in the eastern area of the village, noting that those lands were threatened of confiscation in favor of “National Parks” projects.

At approximately 10:30 on Monday, 25 June 2018, Israeli forces accompanied with a vehicle of the Israeli Civil Administration moved into Kherbit al-Dirat, east of Yatta, south of Hebron. A Civil Administration officer took photos of many houses and handed their owners notices to stop construction works under the pretext of non-licensing. The notices were as follows:

On Tuesday, 26 June 2018, Israeli forces established a military watchtower in al-Bowairah area, east of Hebron, which is near Beit ‘Aynoun area on Palestinian lands belonging to al-‘Eidah Family. It should be noted that Israeli settlers established a settlement outpost on an area of 40 dunums on the Palestinian confiscated lands. On 05 March 2018, the Israeli settlers under the Israeli forces’ protection leveled the plot of land and placed the Israeli flags on it. They also brought a water tank and installed banners on them. In the afternoon, trucks brought 4 mobile homes from “Kriyat ‘Arba’” settlement and put them in the land. The Israeli forces denied Palestinian civilians and the lands’ owners’ access. The new settlement outpost is opposite to “Kiryat Arba” and “Kharsina” settlements.