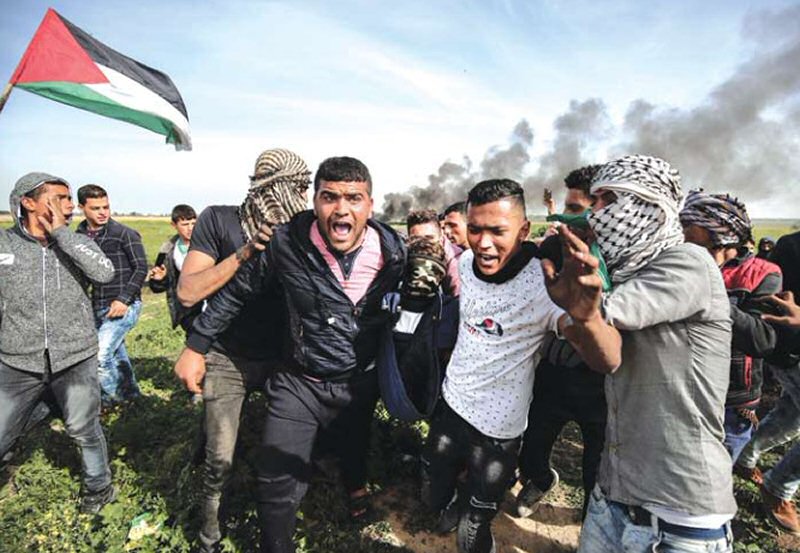 Israeli forces continued with systematic crimes in the occupied Palestinian territory (oPt) for the week of 28 February ‚Äì 06 March 2018.

In the Gaza Strip, on 03 March 2018, Israeli forces killed a Palestinian farmer namely Mohammed Abu Jame‚Äôa (59).¬Ý According to PCHR‚Äôs investigations, on the abovementioned day afternoon, Israeli forces stationed along the border fence between the Gaza Strip and Israel near the military gate next to al-Najjar neighborhood in Khuza‚Äôah village, east of Khan Younis, fired 2 bullets at the farmer, who was working in his land that is 200 meters away from the fence.¬Ý As a result, he was hit with a bullet to the right thigh and then taken to the Gaza European Hospital in the city.¬Ý At approximately 17:30, medical sources declared he succumbed to his injury.

Moreover, 16 Palestinian civilians were wounded, including 4 children, after the Israeli forces fired bullets and tear canisters at them directly during protests where the protestors threw stones at the soldiers stationed along the border fence between the Gaza Strip and Israel.¬Ý These demonstrations are organized in protest against the U. S. President‚Äôs decision to recognize Jerusalem as the capital of Israel and against the closure imposed on the Gaza Strip for the eleventh year.

As part of targeting fishermen in the sea, the Israeli forces continued to escalate their attacks against fishermen in the Gaza Sea, indicating to the on-going Israeli policy of targeting their livelihoods.¬Ý PCHR‚Äôs fieldworkers monitored 12 shooting incidents; 6 in north-western Beit Lahia and 6 others in Western Soudaniyah, west of Jabalia.

As part of targeting the agricultural lands in the border areas, on 03 April 2018, the Israeli drones sprayed toxic pesticides at the agricultural lands that are 200-300 meters away to the west of the border fence between the Gaza Strip and Israel in the northern Gaza Strip.¬Ý It should be mentioned that this is the first time the Israeli forces spray pesticides in this area under the pretext of burning the grasses in the buffer zone.¬Ý These pesticides affected a number of lands and damaged areas of them.

As part of targeting the border areas, in addition to the killing of the farmer mentioned above, on 06 March 2018, Israeli soldiers stationed along the border fence between the Gaza Strip and Israel, east of al-Maghazi, opened fire at the agricultural lands.¬Ý However, no casualties were reported.

In the West Bank, on 28 February 2018, Israeli forces wounded 2 Palestinian civilians when the former moved into al-Am‚Äôari refugee camp in the center of Ramallah and al-Bireh, to carry out an arrest campaign.¬Ý A number of Palestinian children and young men gathered to throw stones at the soldiers, who immediately opened fire at them.¬Ý As a result, the two Palestinian civilians were wounded.

On 02 March 2018, after civilians confronted a group of Israeli settlers who moved into the northern outskirts of Burin village, south of Nablus, under the Israel forces‚Äô protection, the Israeli forces deliberately fired tear gas canisters at a house belonging to the family of Hasan ‚ÄòAwad.¬Ý As a result, the family members and their guests suffered tear gas inhalation.¬Ý Meanwhile, ‚ÄòAmer Qronfol accompanied with his wife Hadil al-Sa‚Äôed carried their 6-month baby, ‚ÄòObadah, and took him to the nearest ambulance.¬Ý However, the Israeli soldiers fired a tear gas canister at them and then a sound bomb under their feet.¬Ý Qronfol headed to al-Rahmah clinic in Nablus, where his baby and wife received first aid.¬Ý The baby was then transferred to Rafidia Governmental Hospital to complete her treatment due to the suffocation.

Moreover, 5 Palestinian civilians were wounded after the Israeli soldiers stationed at the entrances to the Palestinian residential areas in the West Bank fired live bullets and tear gas canisters directly at them during protests and stone-throwing.¬Ý These demonstrations are organized by Palestinian civilians in protest against the American President‚Äôs decision to recognize Jerusalem as the capital of Israel and against the Israeli settlement activities and land confiscations.

During the reporting period, Israeli forces conducted at least 82 military incursions into Palestinian communities in the West Bank and 6 similar ones into Jerusalem and its suburbs. During those incursions, Israeli forces arrested at least 58 Palestinians, including 2 children and a woman, in the West Bank.¬Ý Eight of them, including the woman, were arrested in Jerusalem and its suburbs. Those incursions are accompanied usually with forcing children, women and elderly people to stay outside their houses for hours or locking families in one room, preventing them to move in addition to other acts of harassment and use of police dogs in house raids.

During the reporting period, PCHR‚Äôs fieldworkers monitored 2 assaults by the Israeli soldiers against Palestinian schools.¬Ý On 28 February 2018, Israeli soldiers deployed in Hebron‚Äôs Old City fired tear gas canisters at students of Ziyad Jaber Elemtary School in al-Nasara Valley, east of al-Ibrahimi Mosque, when the students were in the schoolyard.¬Ý On 05 March 2018, Israeli forces moved into ‚ÄòAnata Elementary School for Boys in ‚ÄòAnata village, northeast of occupied East Jerusalem and surprisingly fired tear ags canisters at the schoolyards. ¬ÝIn both incidents, dozens of students suffer gas inhalation and others fainted.

As part of house demolitions, on 06 March 2018, the Israeli municipality demolished a commercial facility in Beer Ayoub neighbourhood in Silwan village, south of the East Jerusalem‚Äôs Old City without any prior warning and under the pretext of building without a license. The facility‚Äôs owner said that the municipality‚Äôs staffs, police officers, and Special Forces moved into the neighborhood.¬Ý They then deployed and raided his carwash and started confiscating the contents and demolishing the carwash.¬Ý He added that the municipality staffs demolished the carwash once before and confiscated the contents.

Settlement Activities, Demolitions, and Settlers‚Äô Attacks against Palestinian civilians and their Property:

As part of the Israeli settlers‚Äô attacks against the Palestinian civilians and their property, on 05 March 2018, Israeli settlers from¬Ý‚ÄúKarayat Arbaa‚Äô‚Äù¬Ýsettlement, east of Hebron, started establishing a settlement outpost in the Palestinian lands in Beit ‚ÄòAynoun area, which the Israeli authorities considered as ‚ÄúState Lands‚Äù with an area of 60 dunums. The Israeli settler placed 3 mobile houses and a water tank, raising the Israeli flags on them.¬Ý All of that happened under the Israeli forces‚Äô heavy guard and in presence of officers in the Construction and Organization department in the Israeli Civil Administration.¬Ý It should be mentioned that these lands belong to ‚ÄòEidah Family.

On 06 March 2018, a number of settlers attacked a bulldozer whose drivier was building an agricultural road for ‚ÄòEinabous village council, south of Nablus.¬Ý The settlers broke the bulldozer windows and punctured the tires in addition to tearing up the hoses with knives.¬Ý Moreover, the driver and a worker accompanying him sustained wounds after the settlers threw stones at them.

Use of Force against Demonstrations in Protest against the U.S. President‚Äôs Decision to Recognize Jerusalem as the Capital of Israel:

Upon calls for demonstrations protesting against the U.S. President Donald Trump‚Äôs Presidential Decree to recognize Jerusalem as the capital of Israel and move the U.S. Embassy to it, Palestinian civilians organized protests against the decision throughout the West Bank and Gaza Strip. As a result, 21 civilians, including 4 children and a blind man, were wounded.¬Ý(This number does not include the number of those wounded during the incursions into the West Bank.)¬ÝIt should be mentioned that PCHR keeps the names of wounded persons in fear of arresting them. The demonstrations were as follows:

PCHR warns of the escalating settlement construction in the West Bank, the attempts to legitimize settlement outposts established on Palestinian lands in the West Bank and the continued summary executions of Palestinian civilians under the pretext that they pose a security threat to the Israeli forces. PCHR reminds the international community that thousands of Palestinian civilians have been rendered homeless and lived in caravans under tragic circumstances due to the latest Israeli offensive on the Gaza Strip that has been under a tight closure for almost 11 years. PCHR welcomes the UN Security Council‚Äôs Resolution No. 2334, which states that settlements are a blatant violation of the Geneva Conventions and calls upon Israel to stop them and not to recognize any demographic change in the oPt since 1967.¬Ý PCHR hopes this resolution will pave the way for eliminating the settlement crime and bring to justice those responsible for it. PCHR further reiterates that the Gaza Strip and the West Bank, including East Jerusalem, are still under Israeli occupation in spite of Israel‚Äôs unilateral disengagement plan of 2005.¬Ý PCHR emphasizes that there is international recognition of Israel‚Äôs obligation to respect international human rights instruments and international humanitarian law.¬Ý Israel is bound to apply international human rights law and the law of war, sometimes reciprocally and other times in parallel, in a way that achieves the best protection for civilians and remedy for the victims.