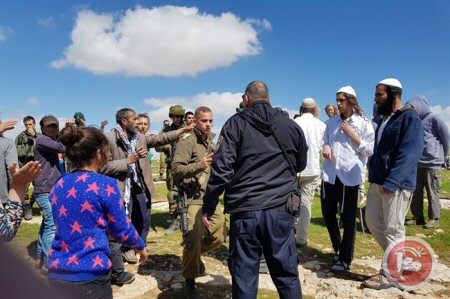 A group of Israeli settlers attacked Palestinian residents of the southern occupied West Bank village of al-Tiwani, and attempted to set fire to the village’s mosque, according to locals.

Locals from al-Tiwani, located in the South Hebron Hills, told Ma’an News Agency that a group of 30 settlers from the Maon and Havat Maon settlements raided the village under the protection of Israeli soldiers.

Settlers reportedly threw rocks at Palestinians and their homes, and attempted to set fire to the village mosque, but were stopped by locals.

Jumaa Ribai, a resident of al-Tiwani, said that “yesterday, the settlers broke my car and threw stones at my house, and today they are renewing their attack on the village and residents.”

This story continues below.

The majority of settler thefts committed against Palestinians are met with impunity, with Israelis rarely facing consequences for such thefts.

Only 1.9 percent of complaints submitted by Palestinians against Israeli settler attacks or theft result in a conviction.