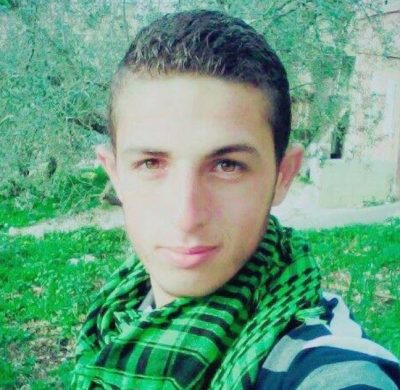 Israeli soldiers killed, on Saturday evening, a young Palestinian man in the eastern area of ‘Orif village, south of the northern West Bank city of Nablus.

Medical sources at Rafidia Hospital in Nablus said the Palestinian, identified as Ameer Omar Shehada, 22, was rushed to surgery after suffering a gunshot injury in his chest, but died from his serious wounds.

The fatal shooting took place after a group of extremist Israeli colonizers invaded the village, before the locals intercepted them, and clashed with them.

Shortly afterwards, dozens of soldiers invaded the town to secure the withdrawal of the Israeli colonizers, and started firing live rounds, rubber-coated steel bullets, gas bombs and concussion grenades at the Palestinians, while many of them hurled stones at the soldiers.

One child, 14 years of age, was shot with a live round in his thigh, while many Palestinians suffered the effects of teargas inhalation.

Also on Saturday evening, dozens of Palestinians suffered the effects of teargas inhalation, in Azzoun town, east of the northern West Bank city of Qalqilia, after several Israeli army jeeps invaded the city.

On Friday evening, the soldiers killed a young Palestinian man, identified as Mohammad Zeid al-Ja’bari, 24, after shooting him with a live round in his chest.

Mohammad, who was deaf and could not speak, was shot in the Bab az-Zawiya area, in the center of Hebron city, in the southern part of the West Bank.