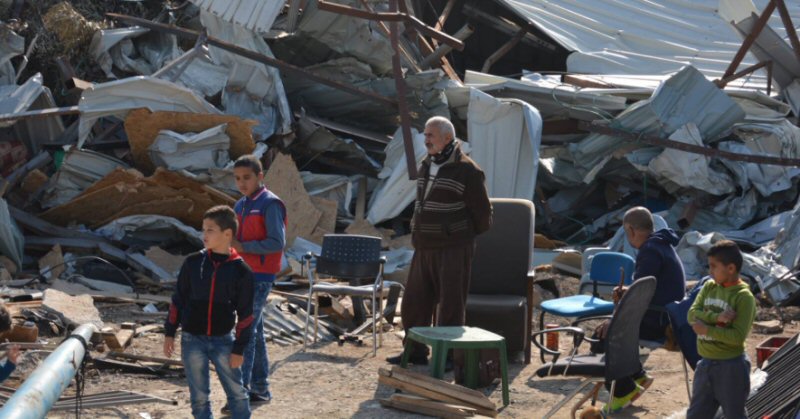 Israeli forces continued with systematic crimes, in the occupied Palestinian territory (oPt), for the week of 29 November – 05 December, 2018.

On the International Day for Persons with Disabilities: Israeli forces killed a Palestinian civilian with a disability in Tulkarem.
5 civilians were wounded in the West Bank. Israeli forces continued to use excessive force against unarmed civilians and peaceful protestors in the Gaza Strip. 98 civilians, including 28 children, 4 women, 2 journalists, and a female paramedic, were wounded; the injuries of four were reported as serious.

In the West Bank, in a new crime of lethal armed force against Palestinian civilians, Israeli forces killed on 04 December 2018, Mohammed Habali (22) in Tulkarm.  He was killed when the Israeli forces moved into the city as part of its operation to search for the Wanted Ashraf Na’alwah and opened fire at a group of young men who were in front of al-Malek coffee shop in the Western neighborhood of the city.  The Information Office of the Minitsry of Health said that the abovementioned was wounded with explosive bullet shrapnel to the head (entered but did not exit); as a result, he immediately died.  His brother, ‘Alaa’, said that his brother suffers from a mental disability and motor impairment.  It should be mentioned that the above-mentioned civilian was killed on the International Day of Persons with Disabilities.

In the same context, the Israeli forces during the reporting wounded 5 civilians in separate shooting incidents.

In the Gaza Strip, as part of using excessive force against the peaceful protesters along the Gaza Strip borders, during the reporting period, Israeli forces wounded 98 civilians, including 28 children, 4 women, 2 journalists, and a female paramedic.  The injury of four of those wounded was reported serious.

As part of targeting the Palestinian fishermen in the sea, the Israeli forces continued to escalate their attacks against the Palestinian fishermen, indicating the on-going Israeli policy to target their livelihoods.  During the reporting period, PCHR documented 4 incidents against fishermen; 3 of them off the northern Gaza Strip shore, and one off the southern Gaza Strip shore.

As part of targeting the border areas on 29 November 2018, Israeli forces stationed along the border fence between the Gaza Strip and Israel, east of al-Shokah village, east of Rafah, opened fire at the Palestinian shepherds.

On 03 December 2018, Israeli soldiers stationed inside the watchtowers heavily opened fire at the bird hunters in the border area adjacent to the border fence between the Gaza Strip and Israel, southeast of Beit Haoun in the northern Gaza Strip.

On 04 December 2018, Israeli soldiers stationed along the border fence between the Gaza Strip and Israel, east of Deir al-Balah, opened fire at a border control point belonging to the Palestinian armed groups.  On 05 December 2018, Israeli soldiers opened fire at the agricultural lands adjacent to the border fence, east of Deir al-Balah.  Though no casualties were reported in those incidents, the farmers, shepherds and bird hunters were forced to leave their areas, fearing for their lives.

On 04 December 2018, Israeli forces moved 100 meters off the Memorial Statute, southeast of Beit Hanoun in the Gaza Strip.  On 05 December 2018, Israeli forces moved a similar distance off Site 16, northeast of the abovementioned village. In both incursions, they levelled and combed vacant lands there amidst sporadic shooting.  However, neither casualties nor damage to the area was reported.

As part of the Israeli house demolitions and notices, on 03 December 2018, Ahmed Siyam self-demolished a storehouse, car parking, and stairs near his house in ‘Ein al-Lozeh neighborhood in Silwan village, south of East occupied Jerusalem’s Old City, to implement the Israeli municipal decision under the pretext of building without a license.

On 04 December 2018, Israeli authorities demolished an under-construction house in al-Sal’ah neighborhood in al-Mukaber Mount village, south of occupied East Jerusalem, and belonging to the family of Na’im Abu Dweih.  The house which was built 2 months and a half ago is 150 square meters and the abovementioned civilian intended to move to it with his family of 12 members, mostly children.

On the same day, Israeli forces demolished a house and its surrounding fences in Wad al-Hummus neighborhood in Sour Baher village, south of occupied East Jerusalem. The 250-square-meter house belonged to Mohammed Hussein Abu Teir near the annexation wall.

In Beit Haninah, north of the city, the Israeli vehicles demolished 2 commercial facilities

built 2 years ago belonging to the families of Taha and Shqeirat.   The two families affected said that the Israeli forces confiscated the construction tools and equipment in the land in addition to demolishing barracks already built on it.  The Israeli authorities also forced Amin al-‘Abasi to self-demolish a parking owned by him in ‘Ein al-Lozeh in Silwan village, south of occupied East Jerusalem.

As part of the settlers’ attacks against the Palestinian civilians and their property, On 05 December 2018, the Israeli Magisterate’s Court issued a decision to evacuate a Jerusalemite building in Wad Hilweh, south of occupied East Jerusalem’s Old City for the interest of “El’ad” Settlement association.  Wadi Hilweh Information Center said that The Magistrate Court issued a decision to evacuate the heirs of the late Mariam Abu Zweir and gave

the family until the beginning of March 2019 to implement the decision to evacuate the property.  The Center added that the property is a house where Ilham Siam and four of her children live in addition to a land ​​about 500 square meters.  The center added that the Magistrate’s Court issued the eviction decision, preceded by a session appointed by the Supreme Court to consider the “ownership of the land.” The documents were submitted to court stating that the land on which the house is built belongs to the late Jamil Siam and not to the late Abu Zweir. The court session will be held on 08 January 2019.

As part of the Israeli house demolitions and demolition notices, on 03 December 2018, Israeli forces demolished 2 houses belonging to Ayman Sharaydeh and Hasan Zayed in Fasayel village, north fo Jericho under the pretext of building without a license, the first house is comprised of one room built of cement and roofed with tin plates on an area of 50 square meters, sheltering him and his wife with 4 children.  MEahwile, the second house is comprised of a room built of steel on an area of 20 square meters, sheltering him with his wife and 8 kids, including 4 children; one of whom suffers a physical disability.

On the same day, the Israeli forces dismantled a barrack built of steel and tin plates from the lands of Qasrah village on Street (505- al-Samerah ‘Aber), southeast of Nablus, and confiscated it.  The barrack belonged to Maqboulah ‘Othman from the nearby Majdal Bani Fadel village and was built on an area of 44 square meters for planting in a land of 70 dunums for reclaiming it.

On 04 December 2018, the Israeli forces demolished (4 barracks) built of fortified steel at the entrance to Haris village, northwest of SAlfit.  The barracks belonged to Fadi, Nadi, and Saleh Soliman and was used as an alminuim workshop, a carpentary workshop, dry clean, and a greenhouse.  Those barracks were on the main street connecting Haris and Bedia villages.

On 05 December 2018, Israeli forces dismantled Change13 School in al-Simiyah village, southwest of al-Samou’a village, south of Hebron, which was accredited by the min8isry of Education and funded by ACF a week ago to take in around 40 to 50 students from the village residents.  The school which was built of isolated tin plates was confiscated and its tiles  were uprooted while those responsible for the construction were not  handed any notice to stop the construction works or demolition orders.

As part of the Israeli settlers’ attacks against the Palestinians civilians and their property, on 03 December 2018, a group pf Israeli settlers from al-Tahta neighbourhood in Awdella village, south of Hebron, and attacked the Palestinian cars in front of the houses’ owners, in its yards and in the village streets.  They also wrote slogans against Arabs and Muslims on the walls of houses and cars and punctured with sharp tools tires of 3 cars and tires of a big bus.

In the Thirty-five week of the March of Return and Breaking Siege activities, Israeli forces wounded 98 civilians, including 28 children, 4 women, 2 journalists and a female paramedic. Doctors classified 4 civilians’ injuries as serious.

On 30 November 2018, Israeli forces wounded 60 civilians, including 13 children and a journalist. The incidents were as follows:

It should be noted that “Karmiel” settlement established on Palestinian civilians confiscated lands is only a few kilometers away from the al-Kherbah and its houses and Israeli settlers are carrying out attacks against civilians in order to force them to leave their land to facilitate the seizure in favor of settlement expansion. Moreover, Regevim Settlement Association, which monitors the Palestinian urban activities in areas classified as “C”, instigates the Israeli Civil Administration to demolish Palestinian houses and facilities and to expedite the execution of demolition orders issued against buildings and houses for which demolition orders have been issued.

At approximately 03:00 on Monday, 03 December 2018, a group of Israeli settlers attacked al-Tahtah neighborhood in Odlah village, south of Nablus. The settlers attacked Palestinian civilians vehicles parked in front of their owners’ houses and yards. The settlers also wrote slogans against Arabs and Muslims on the village streets and punctured with sharp tools the tiers of 3 vehicles and a bus belonging to al-Waleed Company before withdrawing the village. The effected cars belong to ‘Azzam Ahmed Kharouf, Samer Rajeh Rashed, Salah Qawareq, Yaser Qawareq.