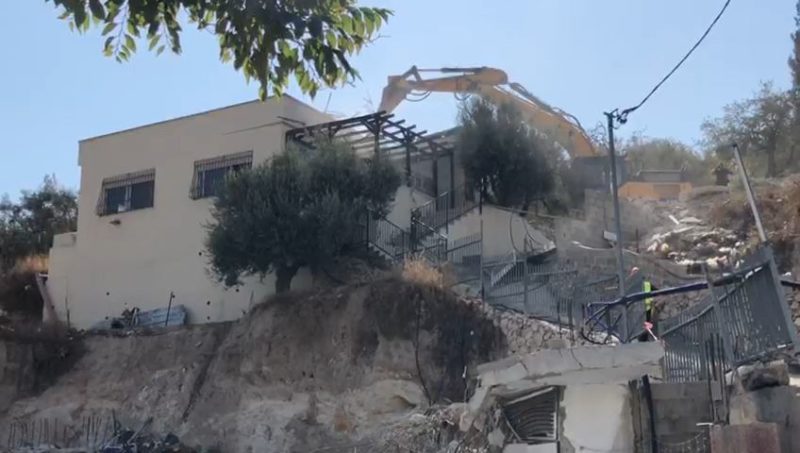 In the Gaza Strip, IOF killed a Palestinian civilian and wounded another in an airstrike on Khan Younis as IOF warplanes carried out several strikes across the Gaza Strip.  Moreover, IOF wounded 147 Palestinian civilians, including 55 children, 3 women, 2 paramedics and a journalist on the 81st Friday of the Great March of Return and Breaking the Siege protest (GMR). In addition, seven shootings at agricultural lands and shepherds were documented near the eastern side of the Gaza-Israel border while 4 shootings were reported at fishing boats in the western Gaza Strip.  No casualties were reported. Meanwhile in the West Bank, IOF wounded 4 Palestinian civilians, including 2 children, in separate incidents.

Under IOF incursions and house raids, 89 incursions into the West Bank were reported. Those incursions include raids of civilian houses and shootings, enticing fear among civilians, arresting and/or injuring many others. During this week’s incursions, 73 Palestinians were arrested, including 12 children and 3 women.  Among the arrestees was Khaledah Jarrar, Member of the Dissolved Palestinian Legislative Council (PLC); ‘Ali Jaradat, a writer, and Fadi al-Hedmi, Minister for Jerusalem Affairs, who was later released.

In the Gaza Strip, IOF carried out a limited incursion during which it leveled lands it had previously bulldozed amidst continued shooting. No injuries were reported.

Under the settlement expansion activities in the West Bank, PCHR documented 10 military orders and 10 military notices to seize 3630 dunums in the West Bank and Jerusalem.  Moreover, IOF demolished a residential building and distributed 10 demolitions notices in occupied East Jerusalem; meanwhile a tent and barn were demolished in Hebron by IOF. Also, 4 settler-attacks were documented against farmers in the olive-harvest season.

In terms of the Israeli closure policy, the Gaza Strip still suffers the worst closure in the History of the Israeli occupation of the oPt as it has entered the 14th consecutive year, without any improvement to the movement of persons and goods, aggravating the humanitarian conditions and bearing catastrophic consequences on all aspects of life. Meanwhile, the West Bank is divided into separate cantons with key roads blocked by the Israeli occupation since the Second Intifada and with temporary and permanent checkpoints, where civilians’ movement is restricted and others are arrested.

IOF continued its excessive use of lethal force against GMR peaceful protests organized by Palestinian civilians in the Gaza Strip.

On 01 November 2019, Israeli forces wounded 147 civilians, including 55 children, 3 women, 2 paramedics and a journalist in the 81st Friday titled: “Down with the Balfour Declaration.”

Thousands of civilians took part in the GRM in the five encampments across the Gaza Strip, where some protestors raised the Palestinian flags and chanted national slogans and attempted to set tires on fire, throw stones, Molotov Cocktails and firecrackers at the Israeli forces, who responded with excessive force.

According to PCHR’s investigations, at approximately 01:37, an Israeli drone fired a missile near Mahmoud Hamzah al-Farah’s 60sqm summer house located on a 1-dunum land in an agricultural area in al-Mawasi, southwest of Khan Younis.  Few minutes, later an IOF warplane fired a missile at the house and destroyed it completely causing a huge crater.  As a result, Ahmed Mohammed ‘Abdullah al-Shahri (27) was killed and his body was retrieved from the rubble, while Khamis Ayman Khamis ‘Abdin (24) sustained wounds and bruises in the head, back and hands.  ‘Abdin stated to PCHR fieldworker that he and al-Shahri were sleeping at the summer house, which his family looks after, when they were woken up by the sound of an explosion and then a louder one.  He recalls waking up later to find himself in Nasser Hospital sustaining various injuries and then he learnt that his friend was killed.  It is noteworthy that there were no armed groups related sites near the targeted area.

This attack was part of a series of airstrikes on 12 military sites and agricultural lands across the Gaza Strip.

Later on, Avichay Adraee, Spokesperson of the Israeli Occupation Forces (IOF), said in a statement that IOF warplanes carried out several airstrikes on several Hamas targets, including a military navy site, an air defense site, another site with an anti-missile shooting simulator, military training, weapons manufacturing and storage sites; as well as, Hamas underground networks in the northern, central and southern Gaza Strip.

Refuting the Israeli claims, all initial data collected by PCHR fieldworker, who visited the targeted house and land in Khan Younis, emphasize that the targeted area is civilian as are the victims.