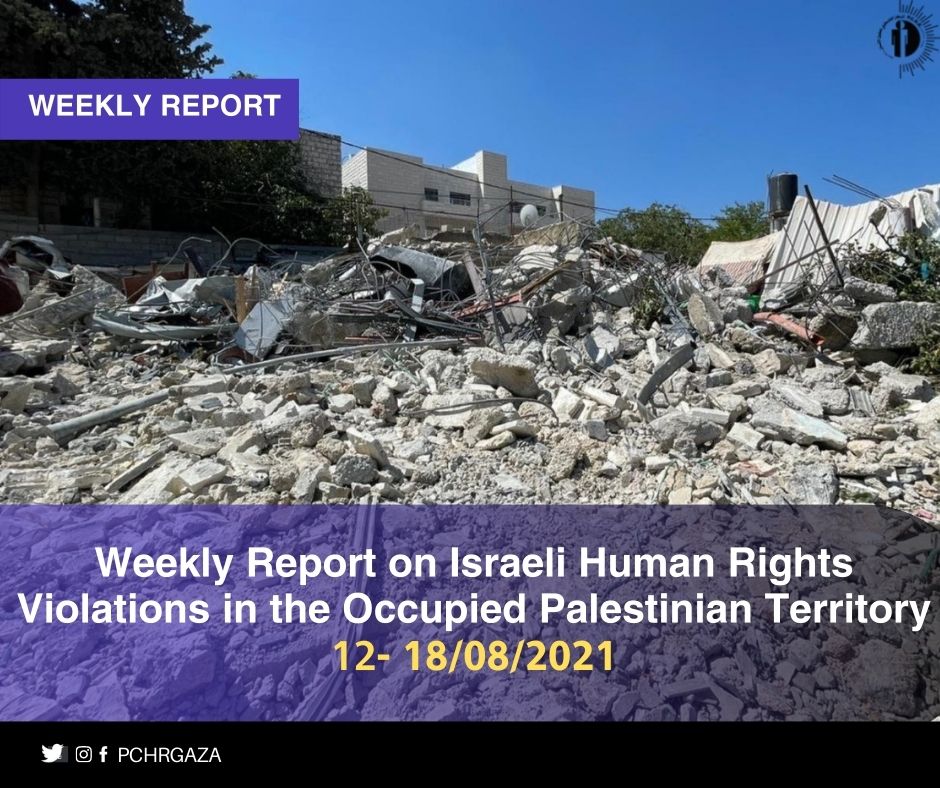 Israeli forces continued to commit crimes and multi-layered violations of international law and international humanitarian law against Palestinian civilians and their properties all over the occupied Palestinian territory (oPt). The army intensified shooting and excessive use of force against Palestinian civilians, incursions into Palestinian cities and villages in the West Bank, including occupied Jerusalem, turning the West Bank into isolated blocks of land. Israeli settlement expansion on Palestinian properties and land continued. Meanwhile, the Gaza Strip enters its 15th year under closure, exacerbating the humanitarian hardships across the territory.

The Israeli army carried out 92 incursions into the West Bank, including occupied East Jerusalem. Those incursions included multi-layered violations, encompassing raids and searches of civilian houses and shootings in many cases, enticing fear among civilians, and attacking many of them. As a result, 49 Palestinians were arrested, including 4 children. During this week’s incursions, soldiers raided the Palestinian Advertising Company in Hebron and confiscated all the printing machines as well as closing it until 10 February 2021.

In the Gaza Strip, the Israeli military conducted a limited incursion into Central Gaza Strip.

Hebron: notices to stop construction works in a dwelling and 2 barracks for grazing sheep was delivered to the owners.

Nablus: a driver was assaulted while working near “Shvut Rachel” Settlement, causing him wounds in the face

Hebron: assault on Palestinian civilians and attacking a woman while covering what was going on.

This week, Israeli occupation authorities continued to ban the entry of dozens of goods, including construction materials, in collective punishment measures against the Gaza Strip as the Israeli closure imposed on the territory entered its 15th year, without an end in sight that would fulfil Palestinians’ right to enjoy their economic, social, and cultural rights. Despite the Israeli occupation’s announcement of a series of relief measures on both Karm Abu-Salem and Beit Hanoun crossing, severe restrictions remain in place as several types of products and raw materials are banned entry.

Meanwhile, occupation authorities continued to divide the West Bank into separate cantons with key roads blocked by the Israeli occupation since the 2000 Second Intifada -still closed to this date- and with temporary and permanent checkpoints, where civilians’ movement is restricted, and they are subject to arrest, especially at al-Karama border crossing, alongside the Palestinian-Jordanian border.

1. A 50-sqm dwelling built of bricks and tinplate and a 200-sqm tinplate barrack for grazing sheep belonging to Mohammed ‘Alian ‘Awad.

2. A 200-sqm tinplate barrack for grazing sheep and a 3-sqm bathroom built of bricks and tinplate belonging to Yousif ‘Alian ‘Awad.