Soldiers Injure Many Palestinians, Including Schoolchildren, In Tulkarem 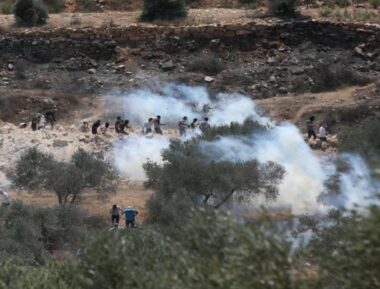 Palestinian medical sources have reported, Thursday, that many Palestinian workers, and schoolchildren, have been injured after Israeli soldiers fired a barrage of gas bombs at workers and two schools near the illegal Annexation Wall, south of the northern West Bank city of Tulkarem.

Eyewitnesses said the soldiers attacked many laborers while working on lands near the Annexation Wall west of Far’on town, south of Tulkarem.

They added that the soldiers fired a barrage of gas bombs at the workers on lands next to two local schools, causing dozens of Palestinians, including schoolchildren to suffer the effects of tear gas inhalation.

The administration of the two schools had to shut them down, and sent the students to their homes to ensure their safety and in fear of additional Israeli violations.

It is worth mentioning that the soldiers constantly attack the Palestinians on their lands in areas close to the illegal wall.