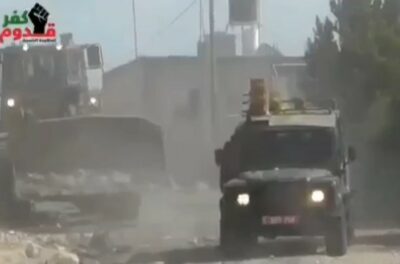 Morad Eshteiwi, the media coordinator of the Popular Committee against the Annexation Wall & Colonies in Qalqilia, said the soldiers invaded Kufur Qaddoum immediately after the procession started.

Several Palestinians then burnt tires and hurled stones at the invading army vehicles. He added that the soldiers fired a barrage of gas bombs and concussion grenades, in addition to rubber-coated steel bullets.

Dozens of protesters suffered the effects of tear gas inhalation, in addition to cuts and bruises.