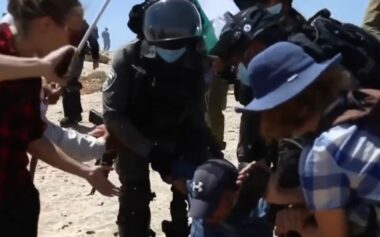 Israeli soldiers attacked, Friday, a nonviolent procession held by dozens of Palestinians and international peace activists, protesting the escalating Israeli violations in the Masafer Yatta area, south of Hebron, in the southern part of the occupied West Bank.

Rateb Jabour, the coordinator of the Popular Committees against the Annexation Wall and colonies in southern Hebron, said dozens of residents held Friday noon prayers on the lands in the Um ash-Shaqhan area, between Tiwani and Shu’ab al-Batim east of Yatta.

Jabour added that Israel is planning to illegally annex the lands from their Palestinian owner to expand the illegal Avigal colony which was built on stolen Palestinian lands.

He added that the soldiers started firing gas bombs, concussion grenades, and rubber-coated steel bullets at the protesters immediately after they started marching to the Palestinian lands carrying Palestinian flags and chanting for liberation and independence.

Medical sources said dozens of protesters suffered the effects of tear gas inhalation in addition to cuts and bruises, before receiving the needed treatment.

It is worth noting that the Palestinians and international supporters were marching to condemn the theft of Palestinian lands after a group of Israeli colonizers brought a bus and installed tens on lands owned by members of the local Jabarin family.