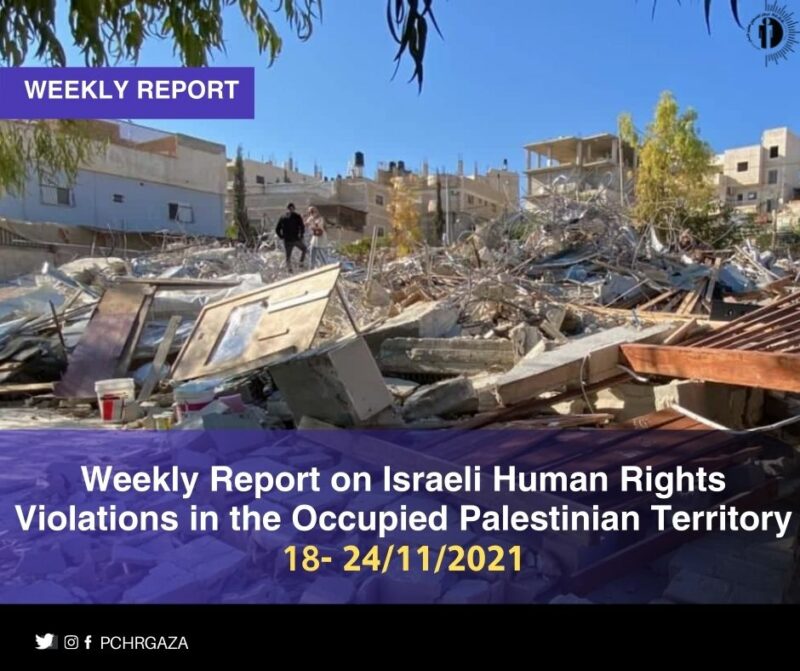 The Israeli settlement expansion works continued on Palestinian lands and properties. Meanwhile, the Gaza Strip enters its 15th year under closure, exacerbating the humanitarian hardships across the territory.

Israeli Forces shooting and violation of right to life and bodily integrity:

Soldiers shot and wounded 5 Palestinian civilians, including 2 children, in excessive use of force in the West Bank: 3, including a child, were wounded in two separate incidents of army attacks on protestors in Qalqilia. Two others were wounded, including a journalist, in Ramallah.

Soldiers carried out 113 incursions into the West Bank, including occupied East Jerusalem. Those incursions included raids of civilian houses and shootings, enticing fear among civilians, and attacking many of them. During this week’s incursions, 73 Palestinians were arrested, including 7 children and 3 women.

Hebron: a house and cemetery razed in Yatta.

Additionally, occupation authorities continued to divide the West Bank into separate cantons with key roads blocked by the Israeli occupation since the 2000 Second Intifada -still closed to this date- and with temporary and permanent checkpoints, where civilian movement is restricted, and they are subject to arrest, especially at al-Karama border crossing, alongside the Palestinian-Jordanian border.

“I am a photojournalist and a reporter at Palestine Times Network, and I am studying media at Birzeit University. At approximately 04:45, while I was covering incidents occurred on the main street of ‘Ein Monjed neighborhood, soldiers, during their withdrawal from the neighborhood, directly fired a rubber bullet around my knee, despite wearing the PRESS-marked vest and presenting away from clashes area. When I felt that I was injured, I tried to sit on the ground, because I couldn’t walk. It turned out later that I was hit with a rubber bullet below my knee, and I sustained minor wounds. I received treatment on the spot.”

Meanwhile, the army stormed and searched al-Rashidiya School, where Fadi Mahmoud Abu Shukheidem (42), who carried out the attack, was working in as an Islamic Education teacher, then they arrested the school guard, Abdul Kareem Abu Kharoub, who was released after several hours of investigation. Furthermore, soldiers surrounded, stormed and searched Abu Shukheidem building in Shu’afat refugee camp, northeast of the occupied East Jerusalem. Soldiers severely assaulted Fadi’s family, damaged the house contents, then they arrested his daughter, Aya (20); his son, Abdullah (8); his brother, Shadi; and his nephew, Basel; and summoned his mother, Samira al-Sweity (69). Several hours later, clashes occurred between dozens of young men and the Israeli soldiers inside the refugee camp, after the camp’s residents closed the main street and threw stones at the Israeli soldiers stationed inside the military checkpoint.

In the evening, a protest launched from Abu Ubaidah Bin al-Jarrah Mosque and headed to Abu Shukheidem building. The army heavily fired teargas canisters at houses and shops in the camp. As a result, dozens of residents suffocated due to teargas inhalation.

a. Land razing, Demolitions, and Notices

Mohammed Raba’ah said that he and his brother Amjad built two buildings on a plot of land 4 years ago, costing them more than 4 million shekels. He added that his 260-sqm building is of 2 floors and houses 4 apartments, and he was supposed to settle in with wife after getting married in 4 months. Meanwhile, his brother, Amjad’s, building is 150 sqms and of 2 floors with 2 apartments, where he lives with his family of 10, including their mother. Rabay’ah said that around 5 months ago the Israeli police raided his house and handed him a paper to refer to the police station in Beit El as they handed him a decision to demolish the 2 buildings under the pretext of building near the “security wall” in the neighborhood.

Rabay’ah added that he hired a lawyer to follow the case and take the necessary procedures, but due to the outbreak of coronavirus, no decision was taken in this case. He said that he attempted many times to obtain a license or make a settlement to demolish one floor, but the occupation authorities refused. He pointed out that the Israeli Supreme Court in Jerusalem held 2 hearings relevant to the 2 buildings and issued a demolition decision without informing him as he and his family were surprised with the decision. Around a week ago, the Israeli police ordered him and his brother to self-demolish the buildings and gave them until Wednesday, 24 November 2021, to do so.

Rabay’ah said that he and his brother refused, as they cannot accept the idea of losing what he has earned for 18 years in minutes. He added the moment the Israeli bulldozers moved into the area to demolish the family houses was the hardest time he experienced in his entire life, especially demolished the houses on the furniture and contents as well as levelling a land planted with trees, which separated the 2 buildings.

It is noteworthy that the Wadi al-Hummus neighborhood extends from Sur Baher village with an area of around 3,000 dunums, and now occupation authorities ban its residents from building on about half of its area, under the pretext of its proximity to the wall that separates the neighborhood from several villages in Bethlehem.

Al-Hamamdah received on 04 March 2021 a notice to demolish the house according to Military Order (1797) issued in 2018, which gives 96 hours to demolish a building starting from the day the military order is handed, under the pretext of unlicensed construction. It should be noted that authorities refused the legal appeals filed by Palestinians on these notices. Meanwhile, around 2 months ago, Hamamdah received a ‘notice of Assault on antiquities.’

Khaled Abu al-Kheir, the bulldozer’s owner, said that the army arrived at the area and confiscated the bulldozer while plowing a plot of land belonging to Nayef Qar’oush under the pretext that the land is within Area C, where work is banned. Soldiers took the bulldozer away and ordered them not to be in the area again.