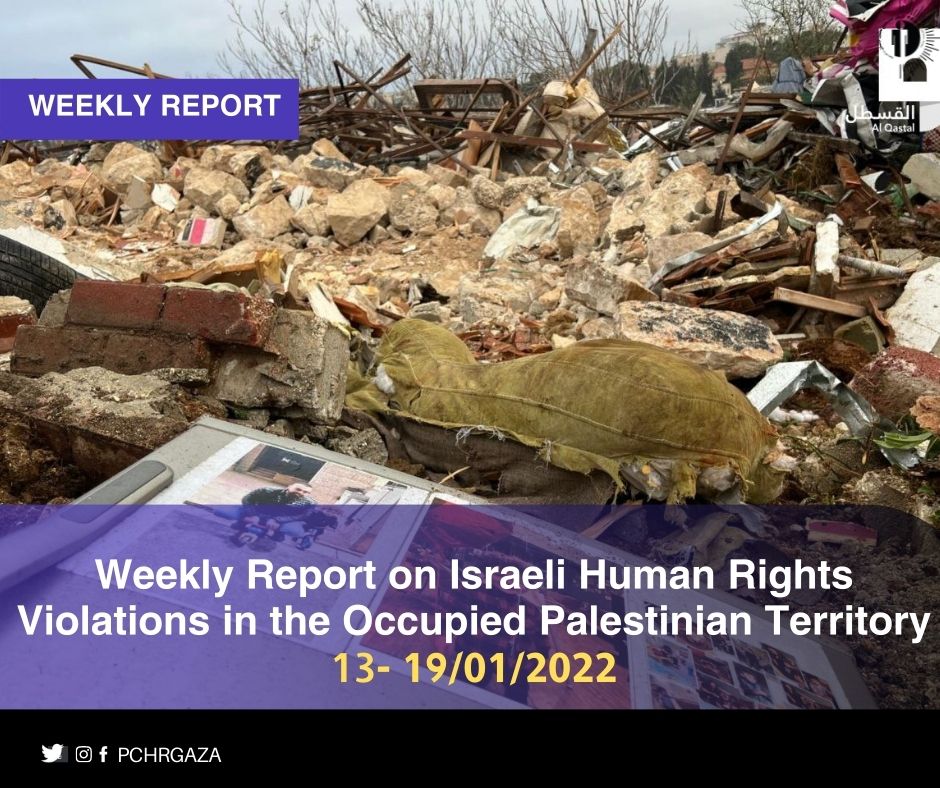 Israeli occupation forces (IOF) continued to commit crimes and multi-layered violations against Palestinian civilians and their properties in the Occupied Palestinian Territory (OPT).

On 17 January 2022, 69-year-old Suliman Eid Al-Hathaleen, from Khirbet Umm al-Khair in eastern Yatta, died of his wounds after an Israeli police truck ran over. Al-Hathaleen was a prominent Palestinian figure and activist against the Israeli settlement and forcible transfer policies practiced against Palestinians. On the day of the incident, the Israeli truck fled the scene leaving Al-Hathaleen without any aid until a Palestinian ambulance was able to transport him to a local hospital in Hebron, where he succumbed to his injuries.

On Thursday, 13 January 2022, a Palestinian was wounded during an IOF raid in Tubas,
On Friday, 14 January 2022, four Palestinians, including a child, were wounded in Kafr Qaddum, Qalqilya, during the IOF attacks on the weekly peaceful protest held there.
In the Gaza Strip, IOF opened fire twice targeting agricultural lands and fishing boats.

IOF carried out 147 incursions into the West Bank, including occupied East Jerusalem. Those incursions included raids of civilian houses and shootings, enticing fear and havoc, destroying their property, and attacking many of them. During this week’s incursions, 102 Palestinians were arrested, including 10 children and a woman. Among the arrestees were two minor students who were detained after IOF raided their school in Ramallah and assaulted the teaching staff.

In the Gaza Strip, IOF conducted 2 limited incursions into its southern and northern areas.

PCHR documented settler-attacks in Burqa and Sebastia in Nablus.

The Israeli occupation authorities continued its collective punishment measures against the Gaza Strip as the 15-year Israeli closure imposed on the territory deepened the population’s humanitarian and living crises, with unemployment skyrocketing at 45%, i.e. 217,000 able workers are unemployed, 63% of whom are youth.

More than half of the Gaza Strip’s population suffer from poverty, as the Palestinian Central Bureau of Statistics data shows that 53% of the Gaza Strip population is impoverished with more than 62.2% classified as food insecure, according to the United Nations Office for the Coordination of Humanitarian Affairs.

Additionally, IOF continued to divide the West Bank into separate cantons with key roads blocked by the Israeli occupation since the Second Intifada in 2000 restricting civilian movement with temporary and permanent checkpoints, where civilian are also subject to arrest, especially at al-Karama border crossing, alongside the Palestinian-Jordanian border.

Mohammed’s family said that he was playing with other boys near the annexation wall in the village when an Israeli patrol passed by. The boys escaped and the patrol chased them. Mohammed fell on the ground when was escaping from the patrol and could not get up after that, the family stated. IOF detained him for a while and then handed him to the medical crews at Beit EIksa checkpoint. They took him to the Palestine Medical Complex to receive treatment, where he underwent surgery to his foot.

According to PCHR’s investigations, at around 15:00 on Wednesday, 05 January 2022, an Israeli police vehicle accompanied with a truck arrived at Kherbet Um al-Kheir entrance to confiscate a few vehicles parked on the road, claiming it was illegal. Meanwhile, several young men closed the main road with stones, and Soliman al-Hatahleen (69) was standing on the side of the road when the truck suddenly veered off the road and struck him meters away before leaving the scene immediately. AS a result, al- Hatahleen sustained serious injuries all over his body, including Brain Hemorrhage, chest bone and spine fractures and lung bleeding. He underwent surgeries and was admitted to the intensive care unit at the hospital until his death was declared at the time mentioned above.

“when the second period started, we were surprised with IOF’s raiding the school with several vehicles. I was in the classroom next to the schoolyard when I saw the soldiers raiding the school. A group of them approached the classrooms, and I tried to prevent them from entering, but one of the soldiers pushed me to the wall and order me to keep away from the classrooms. They raided the administration room and classrooms and arrested Ramez and Ahmed al-Tamimi after beating them severely. They detained Ramez in a classroom and closed the door, preventing us from going inside. They beat and kicked him in his abdomen as well as pushing 3 teachers when they tried to defend him and enter the classroom. IOF later withdrew and took the 2 students where their military SUVs were stationed behind the school fence on the main road. I saw the soldiers blindfolding and handcuffing the students with plastic wires.”

Dozens of Israeli Special forces, intelligence officers, municipality staff and civil defense crews accompanied with military construction vehicles raided Salhiya family land (6 dunums) in order to evacuate it forcibly and demolish facilities established on it, under the pretext of establishing schools to the Israeli Municipality. It should be noted that The demolition came days before the deadline set by the Israeli court for the family to evacuate, i.e. 25 January 2022.


As IOF surrounded the land and all structures built on it entirely, Mahmoud Salhiya and members of his family took to the roofs of both houses established on the land to protest, threatening to open gas cylinders and start a fire if municipal construction vehicles were to get closer. The roof-top sit-in lasted for 10 continuous hours until the Israeli forces retreated, only after razing and destroying several shops and establishments on the Salhiya land on their way out, including a green house, a car repair shop, a car wash, and a barber shop. These enterprises were the main source of livelihood for dozens of Palestinian families. While imposing a cordon on Karm al-Mofti area, IOF summoned special units to disperse the sit-in organized by Salihi family and dozens of villagers, activists, and diplomatic figures, including representatives of the European Union and members of the Israeli Knesset, who joined forces with Salihi family and expressed the illegality of the eviction procedure. Despite the presence of those figures, IOF assaulted and pushed citizens who stand in solidarity with Salihi family as well as press crews. Also, IOF arrested 5 citizens; among them were Yehia al-Khatib and his son Ahmed (15), Abdullah al-‘Akramawi, and Hamza Besiso. It is worth noting imposing cordon on al-Salhiya family land caused a traffic jam in the area and its surroundings and denied students’ access to their schools.

Mahmoud Salhiya’s wife stated that IOF, accompanied with police canines raided the 2 houses at dawn while the families were asleep. She was with her husband, children, other family members and Israeli activists when IOF cut the electric supply to both houses and fired sound bombs inside. She added that IOF forcibly expelled them from the house and physically assaulted all those inside. They also assaulted women in the other house and beat up her sister-in-law. She also said that IOF left all the women and children in their sleepwear outside in the dark and cold weather at close to zero Celsius degrees. Neighbors took them in. She pointed out that she does not know what happened to her husband and the activists who were with him, she only saw Israeli soldiers violently assault them.


Lawyer Waleed Abu Tayeh said that IOF severely assaulted and arrested 20 members of Salhiya family from inside their houses, including Mahmoud Salhiya, 13 other members of his family and 6 Israeli activists. He added that IOF deliberately assaulted Salhiya family members and dragged them on the ground. As a result, Mahmoud Salhiya and a 9-year-old girl were injured during the illegal eviction and demolition operation of the two houses. Abu Tayeh indicated that all the arrestees were detained at the police station in Bab al-Sahera while the Israeli activists were released, on the condition they never enter the Sheikh Jarrah neighborhood. Following the demolition of Mahmoud Salhiya’s house, which sheltered him, along with his wife and 5 children; and the demolition of his mother and his sister’s house sheltering them along with her 4 children. IOF summoned military construction vehicles to the area to remove the rubble, the damaged furniture, and to raze the land. Meanwhile, IOF assaulted press crews and prevented them from approaching the scene or photographing.

Israeli Police claimed in a statement that they assisted the Israeli Municipality in Jerusalem during the eviction of the Salhiya family land and mentioned that the land is confiscated by the municipality to establish educational facilities. It should be noted that Mahmoud Salhiya has been struggling in the Israeli courts for over 23 years to prove his ownership of the land (6 dunums), which is considered as a strategic site in Karm al-Mufti area in Sheikh Jarrah neighborhood, as the Israeli Municipality and Custodian of Absentee Properties Department have long sought to control his land in all ways and ways. In mid-December 2021, the Israeli authorities issued a decision to evacuate the land under the pretext of public interest and gave Mahmoud Salhiya and his family until 25 January to evacuate it. The land includes two residential houses; one of them belongs to Mahmoud Salhiya sheltering him, his wife and their 5 children, while the second house belongs to his mother and sister sheltering them along with her 4 children. Also, there are 5 commercial facilities, property of Mahmoud, established on the land and rented for several persons.

b. Settlers’ Attacks against Palestinian Civilians and their Property