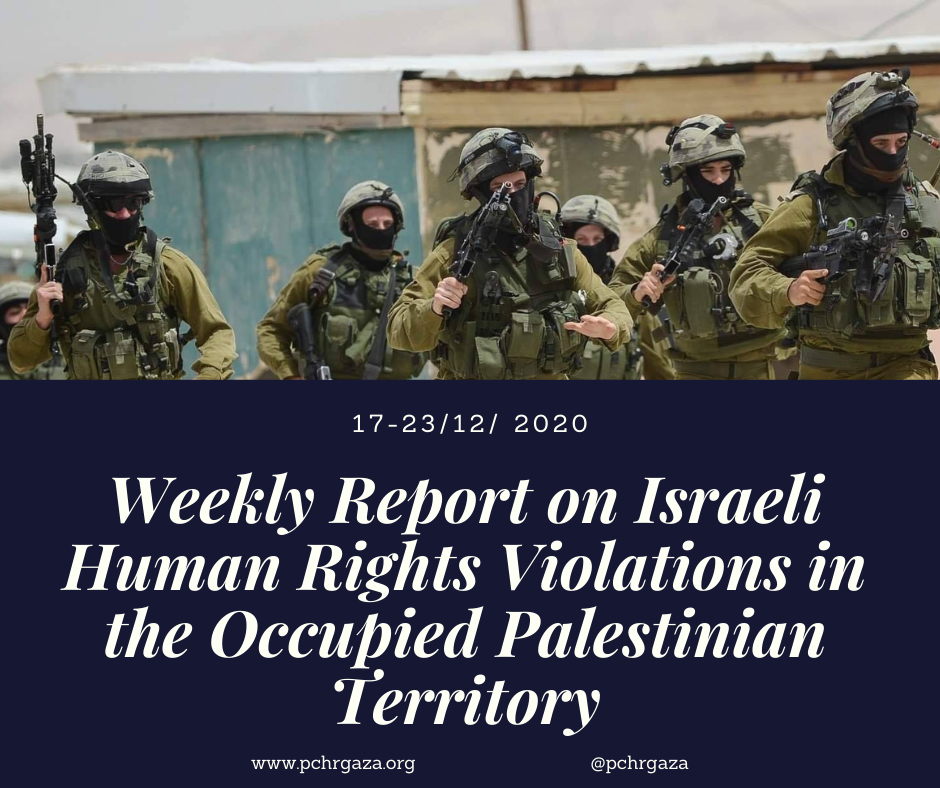 Israeli occupation forces (IOF) continued to commit crimes and multi-layered violations against Palestinian civilians and their properties, including raids into Palestinian cities that are characterized with excessive use of force, assault, abuse and attacks on civilians that are mostly conducted after midnight and in the early morning hours. This week witnessed an escalation in settler attacks, mainly uprooting and cutting trees and seedlings, assaults on civilian houses and vehicles, and assaults on civilians as one was ran over by a car.

Settlers’ attacks peaked on Monday, as the settlers carried out 12 assaults all under IOF protection across the West Bank. Additionally, IOF demolitions of Palestinian homes and properties continued as part of Israel’s de facto annexation and under various pretexts in the West Bank.

This week, the Palestinian Centre for Human Rights (PCHR) documented 193 violations of international human rights law and international humanitarian law (IHL) by IOF and settlers in the oPt. It should be noted that the limitations due to the corona virus pandemic, has limited PCHR’s fieldworkers mobility and ability to conduct field documentation; therefore, the information contained in this report are only part of the continued IOF violations.

Six civilians, including a child, were wounded during IOF excessive use of force in the West Bank: a child was wounded near the Annexation Wall in Jenin; 4 civilians were wounded in an IOF incursion into Nablus; and a sixth person was wounded in IOF shooting at his vehicle in Hebron before arresting him. Additionally, dozens of civilians suffocated due to tear gas inhalation, which was used by IOF to suppress protests and during incursions into Palestinian cities.

In the Gaza Strip, 6 IOF shootings were reported at civilians, journalists, farmers, shepherds and agricultural lands, and twice at fishing boats eastern and western Gaza Strip.

IOF carried out 68 incursions into the West Bank, including occupied East Jerusalem. Those incursions included raids of civilian houses and shootings, enticing fear among civilians, and attacking many of them. During this week’s incursions, 45 Palestinians were arrested, including 6 children and 2 women.

Occupied East Jerusalem: barn self-demolished, and 2 houses were demolished (one by its owners) in Silwan; two commercial barracks and a wall in Jabal Mokabber and Wadi Jier area were demolished.

On Monday, 21 December 2020, witnessed an increase in settler assaults, as PCHR fieldworkers documented 12 assaults, including settler protests, assaults on vehicles and civilians and chanting discriminative slogans across the West Bank.

III. Settlement Expansion and Settler Violence in the West Bank

b. Settler Attacks on Palestinian Civilians and their Property