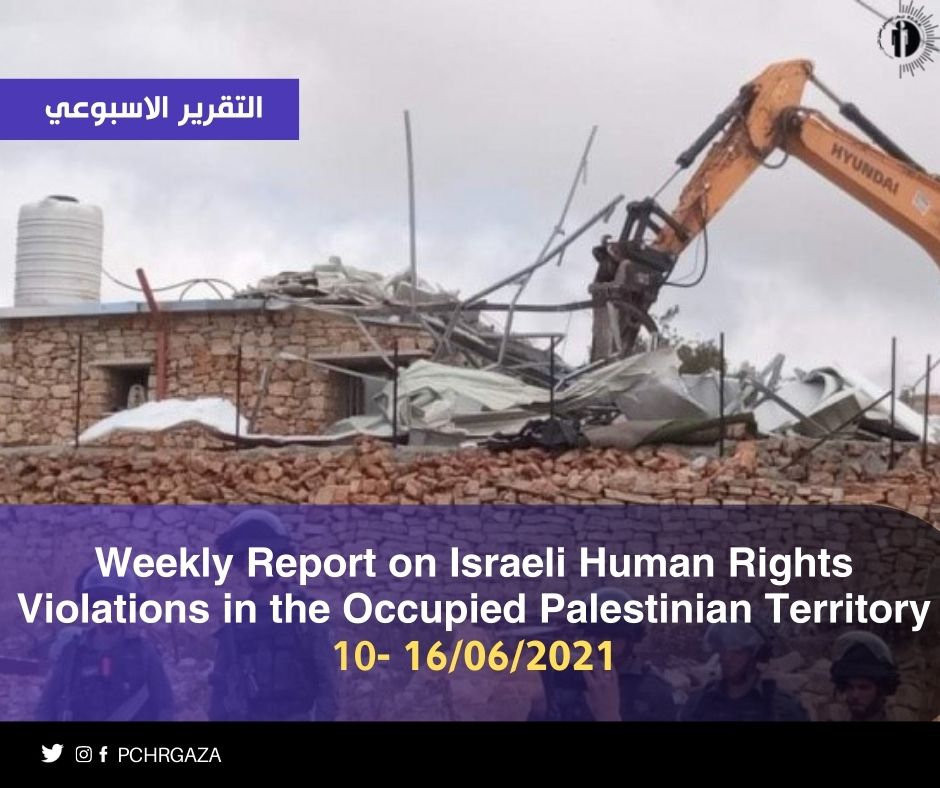 Israeli forces continued to commit crimes and multi-layered violations against Palestinian civilians and their properties, including raids into Palestinian cities that are characterized with excessive use of force, assault, abuse and attacks on civilians that are mostly conducted after midnight and in the early morning hours. This week, soldiers killed 7 Palestinians, including 2 children and 2 women who were killed near military checkpoints, as IOF continues to adopt its “shoot to kill” policy, particularly near checkpoints and areas with military presence. Since the beginning of this year, PCHR documented the killing of 12 Palestinians, including 3 women and a child, on Israeli military checkpoints and other areas with military presence, mostly for alleged stab-attacks without the presence of a serious threat to soldiers’ lives.

The army continued its raids into Palestinian cities that are characterized with excessive use of force, assault, abuse, and attacks on civilians; while occupied East Jerusalem witnessed the largest share of IOF attacks with recurrent settler-raids, the organization of the March of the Flags which included wide-scale attacks on Palestinian civilians and the arrest of dozens. Also the occupation state maintained its demolition and razing activities against Palestinians’ properties and settlers launched attacks on Palestinians and their properties. The occupation maintained its collective punishment policy on the Gaza Strip, keeping both Beit Hanoun and Karm Abu Salem crossings shut, with limited operation for conditional exceptional cases.

The Israeli forces carried out 101 incursions into the West Bank, including occupied East Jerusalem. Those incursions included raids of civilian houses and shootings, enticing fear among civilians, and attacking many of them. During this week’s incursions, 127 Palestinians were arrested, including 11 children, 4 women, and 2 wounded persons.

In the Gaza Strip, the army conducted a limited incursion into eastern Rafah; and arrested 3 Palestinians, including 2 children, after crossing the border fence during a protest in eastern Khan Younis.

Ramallah: 3 residential tents, and a sheep barn (with 180 livestock), dismantled and confiscated; IOF also confiscated a water tank and 3 solar panels in Ramun.

Nablus: 3 commercial facilities demolished (tin-plate roof and made of bricks).

PCHR fieldworkers reported and documented 2 attacks by Israeli settlers on Palestinian civilians and their properties:

The Israeli authorities continued to impose collective punishments against the people of the Gaza Strip by closing Karm Abu Salem and Beit Hanoun “Erez” Crossings (with partial operation). Authorities closed both crossings at the beginning of its military aggression on Gaza on 10 May 2021, and partially opened them for a few days after a ceasefire was declared on 22 May 2021. This comes in a time where The Gaza Strip still suffers the worst closure in the history of the Israeli occupation of the oPt as it has entered the 14th consecutive year, without any improvement to the movement of persons and goods, humanitarian conditions and bearing catastrophic consequences on all aspects of life.

Meanwhile, Authorities continued to divide the West Bank into separate cantons with key roads blocked by the Israeli occupation since the Second Intifada and with temporary and permanent checkpoints, where civilian movement is restricted, and they are subject to arrest.

a. Demolitions, Confiscations, and notices