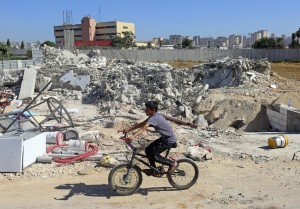 In the West Bank, on 27 July 2016, Israeli forces killed Mohammed Jubarah al-Faqih (29) from Dura, south of Hebron. The aforementioned was killed when a large force of Israeli soldiers moved into Sorif village, northwest of Hebron, and surrounded a 3-storey house belonging to al-Heeh Family. The Israeli soldiers ordered al-Faqih, who was holed up in that house, to surrender but he refused to do so. An armed clash then broke out between al-Faqih and the soldiers, who heavily opened fire from all sides at him. They also fired shoulder-fired missiles at the house in addition to destroying parts of it by their vehicles. Due to the shelling and vehicle attacks, the house was completely destroyed. It should be mentioned that Israeli forces accused al-Faqih of being involved in a shooting attack at a settlers’ car and killed one of them.

On 26 July 2016, 7 civilians, including a child, were wounded when Israeli forces moved into al-Am’ari refugee camp in Ramallah to carry out an arrest campaign. Meanwhile, a number of Palestinian children and young men gathered to throw stones at the Israeli soldiers, who in response opened fire at them. As a result, the seven civilians were wounded.

On the same day, Israeli security guard company officers stationed at Qalednia checkpoint, north of East Jerusalem, opened fire at Raghd al-Sho’ani (18) while crossing the checkpoint via the vehicle track. As a result, she was hit with several bullets in the lower limbs. Israeli forces claimed that al-Sho’ani attempted to stab Israeli soldiers and transferred her to “Shaare Zedek” Medical Centre in West Jerusalem to receive medical treatment.

New house demolition decisions were issued against houses of civilians accused of attacks against Israeli soldiers and settlers. The entrance to al-Fawar refugee camp, south of Hebron, was closed for the third consecutive week.

Israeli forces continued their efforts to create Jewish majority in occupied East Jerusalem. A civilian was forced to self-demolish a residential room. 11 residential buildings were leveled in Qalandia village adjacent to the annexation wall. A house in Silwan and another house and a commercial facility in al-‘Issawiyah were demolished.

At approximately 02:00, on Saturday, 23 July 2016, Israeli forces accompanied with military vehicles moved into Dura village, southwest of Hebron, and stationed in Wad Soud neighbourhood. They raided and searched a house belonging to prisoner Mohamed Abdul Majeed Mohamed ‘Amairah (38). An engineering unit took the measurements of the 1-storey house built on an area of 180 square meters. Israeli forces then handed the family an administrative demolition notice and give them a period until 26 July 2016 to challenge the Israeli court. Israeli authorities accused al-‘Amairah of killing an Israeli settler, along with Mohamed Jabarah al-Faqeh, after opening fire at him near Deir Razah village, south of the city. Israeli forces also raided al-Faqeh’s 3-storey house and took its measurements in addition to threatening the family.

For the 3rd consecutive week, Israeli authorities kept the cordon imposed on al-Fawar refugee camp, south of Hebron, with an iron gate at the western entrance. They also closed all the sub-entrances leading to the camp with sand barriers that resulted in obstructing the civilians’ movement into and from the camp. In the past months and at the beginning of October 2015, Israeli forces closed the iron gate established at the camp entrance for over a month and a half following the shooting attack carried out in Tel Aviv. The camp was closed for the third time since the stabbing attack in “Kharsina” settlement until the reporting period. Israeli forces also closed the iron gate established at the entrance to Dura village, the gate near ” Beit Hagai” settlement, and the iron gate established at al-Fahas entrance and the eastern Yatta entrance, which is supposed to be alternative entrances for the residents.

Israeli attacks in the Gaza Strip

In the Gaza Strip and in the context of targeting Palestinian fishermen in the Sea, on 27 July 2016, Israeli gunboats stationed off Northwest Beit Lahia shore in the northern Gaza Strip heavily opened fire at Palestinian fishing boats. The two gunboats surrounded a Palestinian fishing boat manned by 2 fishermen sailing within 1.5 nautical miles. The Israeli soldiers ordered the fishermen to take off their clothes and jump into the sea in order to swim towards one of the gunboats. They were abducted and then taken to an unknown destination. The boat was also confiscated.

On the same day afternoon, another Palestinian fishing boat was subject to shooting in the same area. Israeli forces chased and confiscated the boat and abducted 6 fishermen. They also damaged another boat.

On Sunday July 24th, at approximately 18:00, a large group of Israeli settlers raided Aqabet al-Khaldiyah neighbourhood in the Old City in East Jerusalem. The settlers provoked and insulted the by-passers. After that, hundreds of young men gathered around the settlers and clashed with them. Large numbers of Israeli soldiers and the intelligence services officers immediately raided the neighbourhood and deployed in the streets. They then attacked and beat the young men while spraying pepper randomly. They also raided and searched several houses and attacked the inhabitants. As a result, more than 14 civilians were wounded, 6 of whom sustained burns as they were pepper sprayed. Moreover, the Israeli settlers beat and abducted 6 civilians, including 2 children. The abducted civilians were identified as Rasheed Sameer al-Rasheq (17), Ahmed Ya’qub al-Salaymah (16), Ahmed al-Rasheq (27), Rami Zaki Baituni (31), Ali Mousa Abu Asab (45) and Mohammed Jamal ‘Akawi (21).

Rashid’s grandfather said that Israeli soldiers raided the family house and pepper sprayed his wife Fawziyah al-Rasheq (63), due to which she was fainted. After that, they abducted his grandson Rashid and son Ahmed from the house. They also beat them and pepper sprayed them. The soldiers raided houses belonging to Abu Asab, al-Salaymah and al-Dayah families in the neighbourhood.

At approximately 13:30, on Friday, 22 July 2016, Palestinian civilians and Israeli and international human rights defenders organized a protest in the centre of Kufor Qaddoum village, northeast of Qalqiliya, and then made their way to the eastern entrance of the village in protest against closing that entrance since the beginning of al-Aqsa Intifada with an iron gate. When the protesters approached the entrance, Israeli forces fired live bullets, rubber-coated metal bullets, tear gas canisters and sound bombs at them. As a result, 2 civilians were wounded, the first (42) was hit with a rubber-coated metal bullet to the thigh, while the second (22) was hit with a rubber-coated metal bullet to the head.

Following the Friday prayer, on 22 July 2016, dozens of Palestinians and Israeli and international human rights defenders organised protests against the annexation wall and settlement activities in Bil’in and Nil’in villages, west of Ramallah, al-Nabi Saleh village, northwest of city, and Kafur Qadoum village, northeast of Qalqilyia. Israeli forces used force to disperse the protesters by firing live bullets, metal bullets, tear gas canisters and sound bombs and chased the protesters into the olive fields and between houses. As a result, many civilians suffered tear gas inhalation and others sustained bruises as Israeli soldiers beat them up. Moreover, Israeli forces abducted 5 civilians, including 2 journalists. They released the abovementioned abducted, while Ashraf Ahmed Abu Rahma (35) was held in Israeli custody for several days.

Due to the number and severity of Israeli human rights violations this week, the PCHR made several recommendations to the international community. Among these were a recommendation that the UN General Assembly transfer the Goldstone Report to the UN Security Council in order to refer it to the International Criminal Court in accordance with Article 13(b) of the Rome Statute.

In addition, the PCHR called upon the United Nations to confirm that holding war criminals in the Palestinian-Israeli conflict is a precondition to achieve stability and peace in the regions, and that peace cannot be built at the expense of human rights.