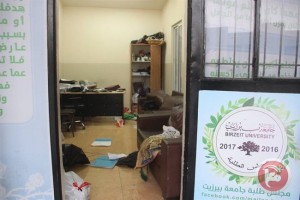 A Palestinian boy was killed at Za’tara checkpoint, south of Nablus, and another civilian was killed in occupied Jerusalem. A peace activist was wounded in al-Eisawiya village, north of Jerusalem.

In the West Bank, in excessive use of deadly force, on 08 December 2016, Israeli forces stationed at Za’tara checkpoint, south of Nablus, killed a Palestinian boy from Qalqilya. Israeli forces claimed the boy attempted to stab Israeli soldiers and settlers at the checkpoint, therefore, they opened fire at him. They kept his corpse in custody.

In a similar crime, on 14 December 2016, Israeli forces opened fire at a Palestinian young man who was present near the Hospice Hotel in al-Wad neighbourhood in East Jerusalem’s Old City. As a result, he sustained over 10 bullet wounds throughout his body. He was left bleeding for over half an hour, as Israeli forces prevented paramedics and doctors from offering first aid to him. Israeli forces then transported him to Hadassa Hospital as his health condition was critical, but he was pronounced dead on the same day evening. Israeli forces claimed the aforementioned person stabbed an Israeli soldier.

On 12 December 2016, an Israeli soldier fired a rubber-coated metal bullet at Mohammed Abu al-Hommos, an activist in al-Eisawiya follow-up committee, northeast of Jerusalem, as he was documenting the Israeli violations during an Israeli incursion in the village. As a result Abu al-Hommos sustained a bullet wound to the left leg and was then transported to a medical centre for medical treatment.

Also this week, Bir Zeit University was raided and belongings of student unions were confiscated.

In the context of house demolitions, on 08 December 2016, two families were obliged to self-demolish parts of their building in Sweih neighbourhood in Silwan village, south of East Jerusalem’s Old City.

On 13 December 2016, Israeli forces demolished a residential barrack, a storage barrack and a commercial facility in sour Baher village, south of occupied Jerusalem, under the pretext they were close to the annexation wall.

In the context of targeting NGOs in occupied Jerusalem, on 08 December 2016, Israeli forces raided Elia for Media office in Saladin Street. They searched it and confiscated 3 PC sets and some documents. They then abducted journalist Lama Hani Ghousha (25), questioned her and released her later.

On the same day, Israeli forces raided the Palestinian National Theater “al-Hakawati” and banned a musical activity under the pretext it was organized by the Palestinian Front for the Liberation of Palestine (PFLP).

In the Gaza Strip, in the context of targeting Palestinian fishermen in the sea, on 11 December 2016, Israeli gunboats stationed off Khan Younis shore in the southern Gaza Strip heavily opened fire around Palestinian fishing boats sailing within the allowed fishing area. A similar attack occurred in the same area on 12 December 2016. The fishermen sailed back fearing for their lives. Neither casualties nor material damage were reported.

Israeli Settlement activities continued in the West Bank by both Israeli soldiers and settlers,

On 12 December 2016, Israeli forces confiscated a container used as a restaurant in Koza area at the main entrance to Beita village, south of Nablus. The container belongs to Mahmoud Ouda, whose restaurant was demolished on 03 November 2016. Therefore, he set up the container to make a living.

On 13 December 2016, Israeli forces confiscated a caravan used as a mobile clinic in Kherbet al-Markaz, east of Yatta, south of Hebron. This caravan works under the supervision of the Palestinian Ministry of Health and offer services to about 120 civilians in Kherbet al-Markaz and Kherbet Janaba.

In the same context, a group of settlers from “Adi Ad” settlement outpost attacked a plot of land and cut down 190 olive trees on 11 December 2016.

In the context of force used against peaceful protests, Israeli forces forcibly dispersed protests organized by dozens of Palestinian civilians and international and Israeli human rights activists against the annexation wall and settlement activities in Bil’in and Ni’lin villages, west of Ramallah; al-Nabi Saleh village, northwest of the city; Termis’ya village, northeast of the city; and Kufor Qaddoum village, northeast of Qalqilya. As a result, dozens of protesters suffered tear gas inhalation and other sustained bruises as they were beaten up by Israeli soldiers.

Due to the number and severity of Israeli human rights violations this week, the PCHR made several recommendations to the international community. Among these were a recommendation that the international community and the United Nations use all available means to allow the Palestinian people to enjoy their right to self-determination, through the establishment of the Palestinian State, which was recognized by the UN General Assembly with a vast majority, using all international legal mechanisms, including sanctions to end the occupation of the State of Palestine;