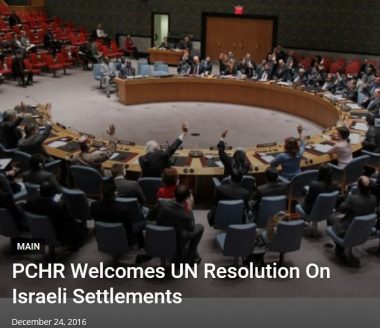 The Palestinian Center for Human Rights (PCHR) welcomes the UN Security Council resolution yesterday condemning the Israeli settlements in the occupied Palestinian territory (oPt). PCHR believes this is a significant resolution that has been waited for.

Moreover, PCHR calls for a prompt and effective action to restore confidence in the rule of the law and put an end to the prolonged Israeli challenge and denial of the international law and to the inherent impunity enjoyed by Israel for decades.

The Security Council adopted a resolution on Friday, 23 December 2016, demanding an end to Israeli settlement construction in the oPt. The resolution, put forward by New Zealand, Malaysia, Venezuela and Senegal, underlined that it would not recognize any changes to the 4 June 1967 lines, including with regard to occupied Jerusalem.

This resolution was taken in view of the ongoing settlement activities implemented by Israel in the West Bank, including occupied Jerusalem, and on the verge of the 50th anniversary of the Israeli occupation of the Palestinian and Arab territory in 1967.

Throughout five decades, Israel has tightened its control on the West Bank and seized over 60% of it in favor of the Israeli settlements and annexation wall.

In addition, Israel has turned the Palestinian cities and villages into cantons due to the establishment of hundreds of military checkpoints tearing the West Bank apart.

Israel has further intensified its settlement activities, including efforts to create Jewish majority in occupied Jerusalem.

The Israeli practices have systematically created a new pattern of apartheid, where Israeli settlers are privileged and supported by their government but Palestinians are denied their basic human rights.

The Security Council resolution yesterday put the Palestinian cause politically and legally back on track after 23 years of a dead peace process that has been employed by Israel to tighten its control on the oPt while the whole world is watching silently, especially the western countries that lost balance and sight, sacrificing the basic principles of the international law, including the international humanitarian and human rights laws.

The resolution stresses again that when the western countries, mainly the USA, lift up, even partially, the political and legal impunity given to Israel, the latter becomes exposed and fragile on the international political and legal levels. However, the Palestinian cause remains a just cause when the law is impartially employed in the conflict.

PCHR hopes this resolution will underpin the latest efforts exerted before the International Criminal Court that initiated a preliminary examination on the situation in Palestine in January 2015.

It is hoped also that Fatou Bensouda, the ICC Prosecutor, will take a positive decision towards initiating a criminal investigation in the situation in Palestine within the coming months.