Peace Now: “US Announcement on Softening Settlements Stance Marks a New Broadside on the Two-State Solution” 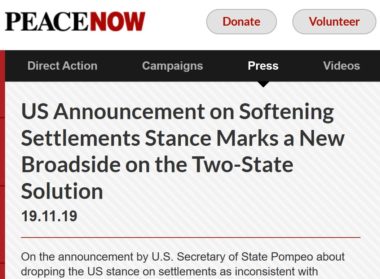 On the announcement by U.S. Secretary of State Pompeo about dropping the US stance on settlements as inconsistent with international law, Peace Now has issued the following statement:

This is a direct assault on the two-state solution and a deliberate choice to pave the way toward more aggressive settlement actions by the caretaker Netanyahu government toward the annexation of occupied territories and to solidify a permanent, undemocratic one-state reality.

The announcement marks a continuation of the Trump Administration’s efforts to undermine years of progress on refining parameters for an agreed-upon resolution of the core issues of the conflict. First, it attempted to sabotage the formula of two capitals in Jerusalem for two states.

Then it tried to take the refugee issue off the table by cutting funds to UNRWA. Now it appears determined to remove the possibility for borders based on the pre-1967 lines plus minor land swaps by countenancing unilateral Israeli land grabs at the cost of a viable Palestinian state down the road.

No declaration will change the fact that the settlements were built on occupied territory, in contravention of international law, and that they pose among the greatest obstacles to peace. It is an Orwellian absurdity to claim that greenlighting more egregious settlement activity by undermining the international consensus against them will foster better conditions for a just and viable conflict-ending agreement.

Furthermore, the timing of this announcement just two days before Benny Gantz’s deadline to form a coalition hints that the Trump administration is yet again attempting to meddle in Israel’s election politics, as it did in with the recognition of Israel’s annexation of the Golan Heights before the April election.

A two-state permanent agreement is fundamentally in the Israeli national interest as a stable way for it to remain a Jewish and democratic state. This U.S. declaration is not pro-Israel. It is a selfish move to pander to a messianic minority in America at the cost of Israel’s future and moral character. It abets the worst of the Israeli prime minister’s policy decisions as he desperately tries to mollify his right-wing flank in order to have a chance at holding onto power.

The United States has always been an ally of Israel. And yet, a true friend would help Israel reach a peace agreement. A true friend of Israel would not lead it down the road to apartheid.

If President Trump really wanted the best for Israel and not merely to bolster Netanyahu’s political fortunes, he would work constructively to bring the sides together and to build on the progress of previous negotiations to broker a viable, comprehensive, and lasting peace agreement.