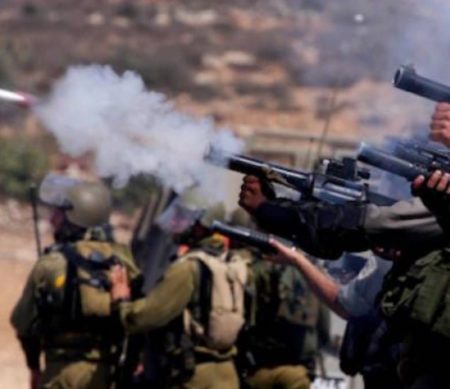 The non-violent gathering was called for by the anti-wall and settlement committee and the Fateh movement, in Tubas, to protest against the continued settlement expansion of the northern Jordan Valley area.

Forces fired a barrage of tear gas canisters and stun grenades to disperse protesters, causing at least five people to suffocate due to tear gas inhalation.

An elderly reportedly sustained bruises throughout his body after being physically assaulted by soldiers, which necessitated his transfer to hospital.

Forces also briefly held a number of journalists and prevented them from covering the protest. They further prevented an ambulance from reaching the area and took the key out of the engine and kept it.

To be noted, Palestinians in al-Humma area are subjected to almost daily attacks by Israeli settlers residing in nearby illegal settlements.