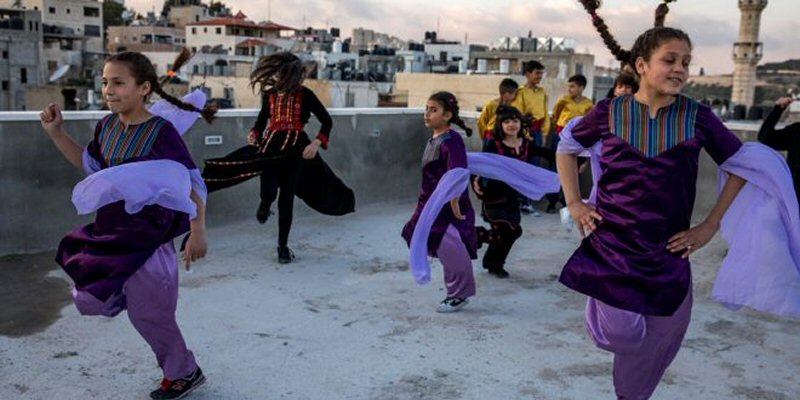 The Association of Pioneers for Culture and Arts in Aida refugee camp celebrated 20 years of arts and culture classes with the opening of their new building Sunday night.

Director General of Pioneers Association for Culture and Arts, Dr. Abdel-Fattah Abu Sorour, hailed the construction of the new building as the next step in Alrowwad’s continued expansion over its two decades of operation.

The centre started as just a small outfit of two rooms for arts and education, working alongside the United Nations Refugee and Works Agency (UNRWA), but has since expanded to three buildings offering educational and artistic services and classes in a number of different areas.

According to the PNN, 90% of employees at Alrowwad are from Aida camp, while 50% or more of them are graduates from the centre.

Abu Souror anticipates that the number of students will grow with the completion of the new facility.

‘I hope that Alrowwad will have different antennas all over,’ Abu Sorour said, speaking of where he sees Alrowwad in the next 20 years, ‘with partnerships in different countries.

‘Because I believe beautiful resistance concerns us all as human beings. That everybody is important, everybody is a change maker.’

‘Hopefully, more people will take their responsibility seriously and think that if they want to see a change they have to make it happen,’ he said.

‘I believe miracles do not happen alone.’

The Alrowwad Society for Culture and Arts christened the new building with an arts display featuring photographic works from the centre’s students, a performance of Dabka by performing arts students, and a presentation of awards in gratitude to international agencies that have supported the centre over the years.

The new facility will expand Alrowwad’s services to include a sewing workshop, an embroidery centre, a new educational centre, photographic studios, 3D printing facilities, a guest house, a kitchen and restaurant facilities for training in the Palestinian cooking, and programs in hotel management.

Abu Sorour expressed his hopes that the new programs will help address the severe unemployment issues in Palestine which some figures put at over 50% among young people.

Previous graduates from the centre expressed their deep appreciation and happiness for the achievement of Alrowwad during the celebrations as well as their pride in their continued involvement.

Mutasim Abu Shaireh, 21, was a volunteer at the centre who started as a child through the Dabkeh program for traditional dance.

Shaireh explained that he continued to train the new students and believed the program provided them with different opportunities and helped them develop into young adults.

After graduating, he remarked, they were provided with jobs which stressed importance of the program to help and support children in the camp.

Shaireh considered the new building as a qualitative leap for the camp and the association in particular.

Ahmed Al-Ajrama, the IT Systems Coordinator at Alrowwad, said that he began his career with the centre in 1998.

He began with theatre studies, where he participated in internal and external tours. He was assisted by the centre to continue his studies.

Al-Ajarma added that the centre has made a positive contribution to the children of the, providing them with job opportunities in addition to opening up the prospects of training and new opportunities of educational grants.