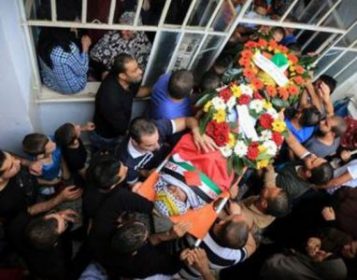 It covered Israel’s violations, committed by its army forces and armed settlers, against Palestinians in the West Bank and Jerusalem for over a year: between September 13, 2015 and September 30, 2016.

Israeli authorities retained the bodies of more than 100 Palestinians since last September 2015 and rejected calls made by members of the international community, including human rights organizations, for a serious investigation into Israel’s extra-judicial executions.

According to the report, Israel continues to hold the bodies of 15 Palestinians, including 5 minors for allegedly carrying out attacks against Israeli targets.

Out of the 18,000 Palestinians injured since September 30, 699 children were transferred to hospital, including 422 who were injured as a result of being shot with live ammunition, and 174 were injured after being shot with rubber-coated bullets. Others have suffered from tear gas inhalation, assaults and burns.

According to United Nations Office of the Coordination of Humanitarian Affairs to the occupied Palestinian territories (OCHA) until September 30 the Israeli authorities demolished at least 974 Palestinian structures; including 266 international donor-funded structures. As a result, nearly 6,547 people including 2,051 children were affected and around 1,597 people were displaced; including 746 children.

The Negotiations Affairs Department said that during the past 10 years, more than 11,000 attacks were perpetrated by illegal Israeli settlers against the occupied Palestinian population and their properties.

Since September 13, 2015, Israeli settlers carried out nearly 795 (reported) attacks against Palestinians, their properties and places of worship.

“These settlers have acted with impunity and with the support, protection and complicity of the government of Israel and its occupying forces,” it concluded.