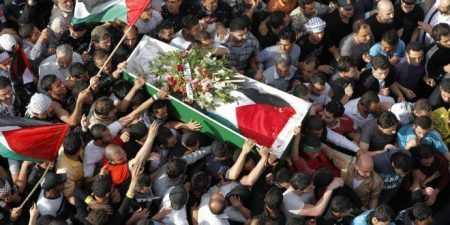 This report, prepared by the Palestinian Liberation Organization (PLO), summarizes Israel’s violations, committed by its occupation forces and armed settlers, for over a year: between September 13th, 2015 and September 30th, 2016 (384 days), against occupied Palestine.

Such grave violations of international law illustrate, according to the PNN, Israeli policies of annexation and colonization, imposing a de-facto one state reality; an apartheid regime. Despite the aforementioned, Israel continues to enjoy impunity and the international community continues to limit itself to issuing statements and declarations while avoiding its responsibilities to hold the Israeli state accountable for the crimes it continues to commit against the land and people of Palestine.

The Israeli occupation of Palestine now enters its 50th year. Nonetheless, inalienable Palestinian rights, particularly their right to self-determination, remain unfulfilled. It is time for the international community to uphold their historic and legal responsibility and to take serious actions to protect the Palestinian people and to pressure Israel to end its prolonged belligerent occupation of Palestine.

Since last September of 2015, the state of Israel was responsible for the death of 248 Palestinians, 74% of them 25 years-old or younger. As part of its collective punishment policy against the Palestinian people, Israeli authorities have retained more than 100 bodies of Palestinian martyrs since last September 2015, while rejecting calls made by members of the international community, including dominant human rights organizations, for a serious investigation into Israel’s extra-judicial executions.

The Israeli occupying forces continued to commit crimes against the people of Palestine under the pretext of “suspicion of planning or carrying attacks”.

Several international human rights organizations, including the International Federation for Human Rights, Human Rights Watch and Amnesty International, called Page 3 of 15 upon Israel to halt such practices, and some of their reports have specifically included references to killings in a “random and deliberate way”.

Since September 13th 2015, the Israeli forces have stormed Palestinian neighborhoods, refugee camps and villages to demolish Palestinian homes and other structures, and to deliver demolition orders. According to UNOCHA, until September 30th, 2016, the Israeli authorities demolished at least 974 Palestinian structures; including 266 international donor-funded structures. As a result, nearly 6,547 people including 2,051 children were affected and around 1,597 people were displaced; including 746 children.

The current extremist Israeli government continues its despicable attempts to bury the two-state solution with its systematic violations of international law. This report shows only a glimpse of the daily reality of Israel’s colonization of Palestine in the absence of international accountability.

A daily reality that continues to bury the hope of millions of Palestinians, both living under occupation and in exile. At a moment when are approaching a century of the infamous Balfour Declaration as well as the 50th year of Israel’s prolonged belligerent military occupation of the West Bank, including East Jerusalem, and the Gaza Strip, we continue to call upon the international community to assume its responsibilities.

At the same time, we continue to work for justice and peace through international organizations and forums, including the International Criminal Court (ICC). In order to end the Israeli occupation and achieve an end of conflict agreement based on the two-state framework, accountability and justice should be enshrined in the international community’s dealings with Palestine.

This is the only way to make Israel realize that its occupation of Palestine does not only endanger Palestine, but also the future of the region as a whole.