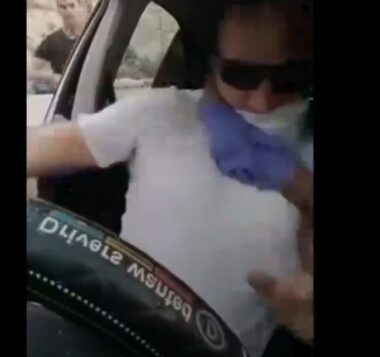 On Wednesday, several Israeli police officers, including undercover forces, abducted a Palestinian man after smashing the windows of his car and breaking into it while he was listening to music and broadcasting live on a social media outlet.

The Palestinian man, Marwan Husseini, from the southern West Bank city of Hebron, was parked near Maale Adumim road, east of occupied Jerusalem, and was listening to music and broadcasting live on Facebook, when the Israeli officers smashed the windows of his car, and dragged him out, before abducting him.

Eyewitnesses said the Palestinians did not do anything wrong, as he was just sitting in his own car, enjoying some Arabic music and broadcasting live on Facebook when the officers started smashing the windows of the car and dragged him out.

“This is just barbaric, and an extremely violated behavior against someone who was just listening to music, not doing anything wrong or endangering anybody’s life,” one of his relatives said, “They did not have to resort to this type of violence, they could have easily arrested him from his car by ordering him to step out instead of this type of a thuggish behavior.”