PPS: “25 Journalists Are Imprisoned By Israel, Seven Of Them Without Charges Or Trial” 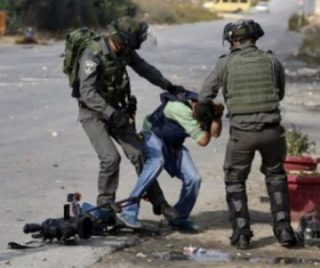 The Palestinian Prisoners Society (PPS) has reported that Israel is holding captive 25 Palestinian journalists, including seven who are imprisoned under arbitrary Administrative Detention orders, without charges or trial.

The PPS said the Israeli Authorities are holding seven journalists under Administrative Detention, without charges or trial, except for the alleged “secret files,” that neither the detainees nor their lawyers have access to.

One of the journalists who are held under Administrative Detention is Malek al-Qadi, a journalism student of the Al-Quds University, who is also holding a hunger strike, protesting being detained for the 49th consecutive day without charges.

The PPS added that detained journalist, Nidal Abu Aker, held several hunger strikes; he was abducted last month on August 9th, and was previously imprisoned by Israel for thirteen years, including nine under Administrative Detention orders without charges or trial.

In addition, the PPS said that Israel is also holding captive 18 additional journalists, some of them were sentenced to various prison terms, and others are still under interrogation.

The longest-serving journalist is Mahmoud Mousa Issa; he was kidnapped 22 years ago and was sentenced to life in prison.