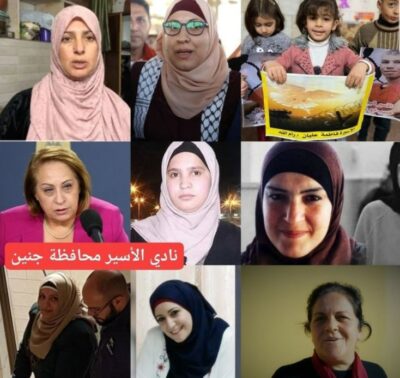 In a report released Sunday, the Palestinian Prisoners’ Society (PPS) said that, while various parts of the world, including Palestine, are preparing to celebrate Mother’s Day (March 21), Israel is still holding captive twenty-one women, including ten mothers.

The PPS said Israel does not allow the families who are permitted to visit with their imprisoned loved ones to have any physical contact as they always must speak while separated by barriers; therefore, detained mothers cannot hug or even touch their children, and occupation authorities continue to deny the detainees the right to interact with their families by phone or other means.

“Female detainees face various sorts of violations starting from the moment of their abduction mainly at dawn and removing them from their children and families to take them to interrogation facilities for extended periods without allowing them family visits,” the PPS stated, “They face systematic violations deprived of basic rights guaranteed by International Law and all related treaties.”

The PPS also said that one of the main reasons Israeli soldiers abduct and imprison Palestinian mothers is to force their sons to turn themselves in to the army, adding that one of these cases is Itaf Jaradat, who was recently abducted because the army is trying to abduct her son.

It is worth mentioning that Itaf is also the mother of three detainees; Omar, Gheith, and Montaser, and the army demolished her home.

“The Israeli occupation tries to break the will of the Palestinians, the mothers, and the families, and we have seen many cases of how Israel abducted and imprisoned mothers because the army failed to abduct their sons,” the PPS added, “We also have thousands of cases where Palestinian mothers were never allowed visits with their families for years throughout their imprisonment. In addition, we documented hundreds of cases where Palestinian detainees lost their mothers, but Israeli laws do not allow them to attend the funerals of their loved ones….”

The following are the names of imprisoned mothers: