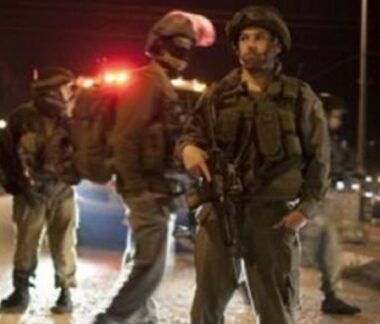 The Palestinian Prisoners’ Society (PPS) has reported that Israeli soldiers abducted, earlier Thursday, 15 Palestinians from their homes in several parts of the occupied West Bank.

Among the invaded buildings is the family home of Arif Sharif Jaradat, 22, who was died, on June 19, 2016, from serious wounds he suffered on May 4, 2016, after Israeli soldiers shot him in the abdomen and the bullet exited from his back. Arif had Down’s Syndrome.

In addition, the soldiers invaded the home of a former political prisoner, identified as Ismael Halabiyya, from Abu Dis town, east of Jerusalem, and summoned him for interrogation.

In Nablus, in northern West Bank, the soldiers abducted Suleiman al-Ka’bi from his home.

Furthermore, the soldiers invaded the towns of al-Yamoun and al-‘Arqa, west of the northern West Bank city of Jenin, and confiscated surveillance equipment.

The PPS added that the soldiers also invaded the Um ash-Sharayet neighborhood in the al-Biereh city, and abducted Yahia Jamal Tawil.