PPS: Israeli Forces Detain Dozens of Palestinians Including a Minor 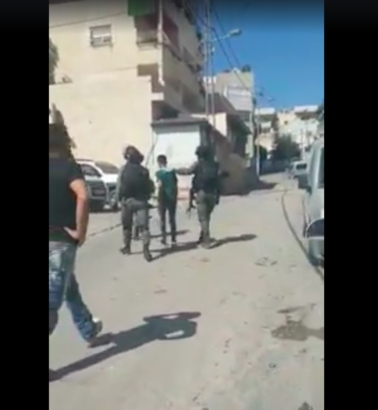 The Palestinian Prisoners’ Society (PPS) in a statement, confirmed the detention of 24 Palestinians, including a journalist.

The PPS stated that at least 10 Palestinian civilians were arrested from several areas of the Ramallah and Al-Bireh governorate, in the central occupied West Bank.

The PPS added that at least 7 Palestinians were detained from occupied East Jerusalem, including the Director of the Office of the Secretary-General of the National People’s Congress, Moaz Al-Ashhab, Arafat Naguib, Obadah Najib, Muhammad Awad, Mustafa Al-Tarhouni, Muhammad Nayef Obeid, and Salama Ghasseb Ubaid.

Another former prisoner, Youssef Jamal Al-Zubaidi, from Jenin, in the northern West Bank, was detained by Israeli troops.

Video: WAFA News Agency
[Jerusalem: The occupation forces arrested the child Abdullah Ubaid from his home in the village of al-‘Isawiya]