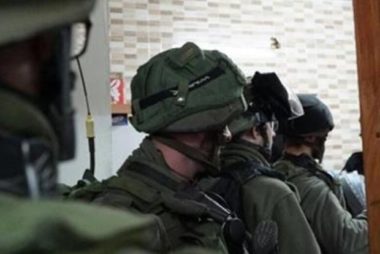 The Palestinian Prisoners‚Äô Society (PPS) has reported that Israeli soldiers abducted, on Monday at dawn, twenty-two Palestinians in several parts of the occupied West Bank, after the army invaded and ransacked dozens of homes.

It also said the soldiers caused dozens of Palestinians to suffer the effects of teargas inhalation in Balata refugee camp, near Nablus, in northern West Bank, and Deheishe refugee camp, south of Bethlehem.

In Ramallah, in central West Bank, the soldiers invaded many communities, broke into and searched homes, and abducted the head of Birzeit University Students‚Äô Council, Yahia Rabea‚Äô, and Bassel Ladadweh, both from the al-Mazra‚Äôa al-Gharbiya town, in addition to Omar Mahmoud Rabea‚Äô and Omar Jamal Sheikh, from Deir Abu Mashal town.

« Israeli Soldiers Injure Many Palestinians Near Nablus Soldiers Force Farmer And His Family Out Of Their Land, Near Bethlehem »