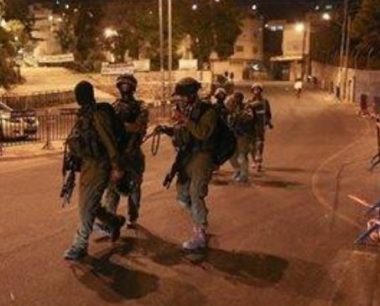 Adel Amer, the Secretary of Orif Local Council, said the Palestinians intercepted dozens of colonists, who infiltrated into the village at dawn, before the soldiers attacked the villagers, and fired live rounds, rubber-coated steel bullets and gas bombs.

He added that the soldiers shot three Palestinians with rubber-coated steel bullets, and caused dozens to suffer the effects of teargas inhalation.

Amer also said that many soldiers surrounded the area leading to Orif Secondary School, just as the students started heading to there in the morning, and prevented them from approaching it.

The soldiers abducted two children, who remain identified at the time of this report, and took them to a nearby military base.

Furthermore, the soldiers invaded the home of Samir Mohammad Sawalma, and detained him and his family in one room, before using the property and its rooftop as a military post and a monitoring tower.