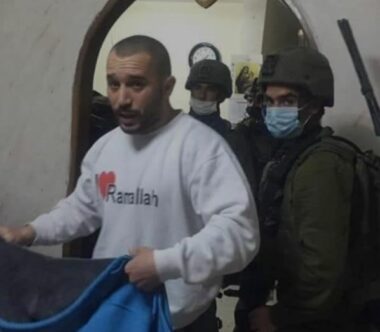 The Palestinian Prisoners’ Society (PPS) has reported that Israeli soldiers abducted, Tuesday, 24 Palestinians, including many former political prisoners and a journalist, after the army invaded and ransacked dozens of homes across the occupied West Bank, including Jerusalem.

In Ramallah governorate, in central West Bank, the soldiers searched homes in many villages and towns, before abducting thirteen Palestinians, most of them former political prisoners.

Also in Ramallah, the soldiers abducted a journalist, identified as Yousef Fawadla, from his home in ‘Aboud village, west of Ramallah.

The soldiers also abducted a young woman, identified as Bayan Salah al-Hasasna, from her home in the al-‘Obeydiyya town, east of Bethlehem, and released her a few hours later after scheduling a court hearing for this coming Thursday.

In addition, the soldiers abducted a former political prisoner, identified as Mohammad Mer’ey, from his home in Qarawat Bani Hasan town, northwest of Salfit, in central West Bank.

In occupied Jerusalem, the soldiers abducted Mohammad Tha’er Abu Khalil, Wael Mahmoud, Bara’ Mahmoud, Jihad ‘Oweida, and Eyad al-Hadra, from their homes in the city and nearby towns.

Also in Jerusalem, the soldiers Essam Najib, who works for the Waqf and Endowment Department as a guard of the Al-Aqsa Mosque, in Jerusalem, after the army invaded the courtyards of the holy site.