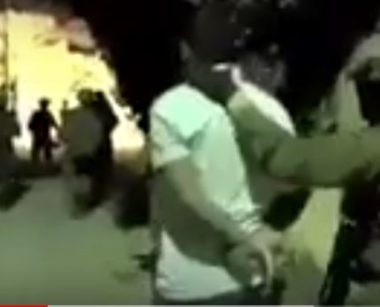 The Palestinian Prisoners’ Society (PPS) has reported that Israeli soldiers abducted, overnight and on Thursday at dawn, at least 56 Palestinians from their homes in various parts of the occupied West Bank, including 22 from occupied Jerusalem, and 17 from Ramallah.

The PPS stated that the soldiers conducted extensive and very violent searches of dozens of homes across the West Bank, and interrogated the families while inspecting their ID cards.

The soldiers also installed many roadblocks across the West Bank, before stopping and searching dozens of cars, and interrogated the Palestinians while inspecting their ID cards.

Many former political prisoners are among the abducted Palestinians, in addition to siblings, while the soldiers also searched cars, buildings, lands and various structures, causing serious property damage to homes, buildings and cars.

The soldiers imposed severe restrictions on the movement of the Palestinians across the West bank, especially in occupied Jerusalem, mainly its Old City and the areas surrounding Al-Aqsa Mosque, and prevented dozens from Palestinians from reaching the holy site for dawn prayers.

The soldiers also abducted four siblings in Nablus, in northern West Bank, after the army killed Ashraf Na’alwa in their home.

It is worth mentioning that the undercover Israeli soldiers also abducted, Thursday, three Palestinians, who remained unidentified at the time of this report, after ambushing them while driving in the area.