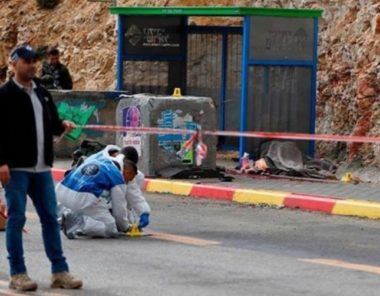 Israeli sources have reported that two settlers were killed, and two others were injured, in a shooting attack close to the illegal colony of Ofra, near Ramallah, in central West Bank.

The shooting took place at the hitchhiking section of Givat Assag, in the Benyamin Regional Council of Settlements, between Beit El and Ofra, illegal colonies.

They moved an Israeli man, who suffered a severe gunshot wound to the head, to Hadassah Ein Karem hospital, and a woman to Shaarei Tzedek Medical Center, in occupied Jerusalem, suffering serious wounds.

The army said, according to its initial investigation, the shooter got out of a vehicle, before approaching the hitchhiking station, and opened fire at the people waiting there, then ran back to the car, where another man was behind the wheel, and both managed to escape unharmed.

The four settlers are in their twenties; the identities of the two killed Israelis are yet to be released.

Following the incident, dozens of colonialist settlers invaded the eastern area of ‘Asira al-Qibliya village, south of Nablus, before the Palestinians intercepted them, leading to confrontations.

The Israeli army also closed the Qalqilia-Nablus road, and installed dozens of roadblocks around Nablus, before stopping and searching hundreds of cars, and imposed a tight siege on Ramallah governorate.

In addition, the soldiers closed Huwwara military roadblock, south of Nablus, and prevented the Palestinians from crossing, while groups of colonialist settlers hurled stones at many Palestinian cars.

It is worth mentioning that, at 1 am on Thursday, a squadron of soldiers and police officers invaded Nablus, surrounded the house where a Palestinian suspected of killing two Israeli settlers, was believed to be hiding, and shot and killed the man, who was identified as Ashraf Waleed Suleiman Na’alwa, 23.

On Thursday at dawn, the soldiers killed a Palestinian, identified as Majd Mteir, 26, in the al-Waad Street, in the Old City of occupied Jerusalem, after he reportedly stabbed and injured two Israeli police officers.