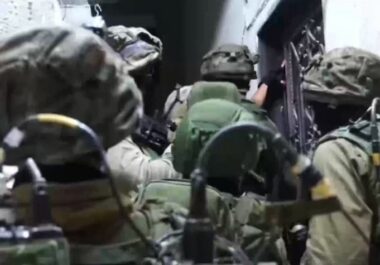 The Palestinian Prisoners’ Society (PPS) has reported that Israeli soldiers abducted, on Wednesday at dawn, eleven Palestinians from several parts of the occupied West Bank, including occupied Jerusalem, in addition to invading a school.

The PPS said the soldiers abducted Abdul-Rahman al-Basheeti, from his home in the Old City of Jerusalem, after invading the property and ransacking it.

In Hebron governorate, in southern West Bank, the soldiers abducted Husan Taiseer Rib’ey, from Yatta town, and Emad Ahmad Jadallah, 26, from Tarrama area. The soldiers also invaded many homes, and interrogated the residents while inspecting their ID cards.

In Jenin, the soldiers abducted Hassan Nayef Jarrar, from the al-Hashimiyya village, and Mo’men Ahmad Abu M’allah, from Qabatia town, after storming their homes and ransacking them.

Furthermore, the soldiers invaded the al-Jalama village, northeast of Jenin, before storming a local school, confiscated surveillance recordings after detaining the school custodian, Shaban Othman, and interrogated him.

In Ramallah, in central West Bank, the soldiers abducted two Palestinians, who remained unidentified at the time of this report, after stopping a car they were riding near Nabi Saleh village, north of the city.

In addition, undercover Israeli soldiers kidnapped a young man, identified as Yasser Darwish, after stopping him near Atara military roadblock, north of Ramallah.