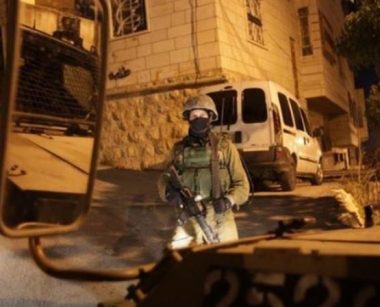 Israeli soldiers abducted, overnight and at dawn Tuesday, fifteen Palestinians from their homes, in several parts of the occupied West Bank, including seven in occupied Jerusalem.

In Bethlehem, the soldiers abducted Raed Mustafa Taqatqa, from Beit Fajjar town, south of the city.

In Jenin, in northern West Bank, the soldiers abducted a former political prisoner, and a leader of the Islamic Jihad, identified as Bassam Sa’adi, after seeking his capture for five years.

Two of his children, Abdul-Karim and Ibrahim, and his mother, were killed in previous invasions into the area.

In Jericho, the soldiers invaded Aqbat Jabr refugee camp, and abducted Fakhr Awad, and took him to an unknown destination.

Another Palestinian, identified as Sa’id Mohammad Suleiman, was abducted in Tubas, in northeastern West Bank.