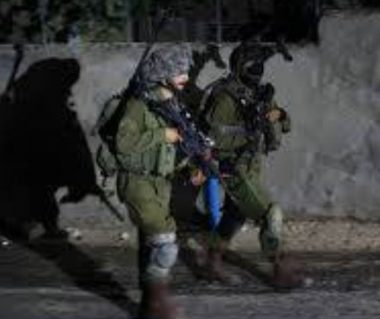 The Palestinian Prisoners’ Society (PPS) has reported that Israeli soldiers abducted, on Tuesday at dawn, fifteen Palestinians in several parts of the occupied West Bank, including Jerusalem.

In Bethlehem, the soldiers abducted Ahmad Lutfi Da’amsa, and Ayman Mustafa Malash, after invading their homes, and searching them.

In related news, the soldiers also demolished a home, owned by Emad Ayyad, in Beit Hanina town, north of Jerusalem, allegedly for being built without a permit.

It is worth mentioning that the soldiers have abducted at least 700 Palestinians, including fifteen women and 190 children, since the U.S. President Donald Trump, made his illegal recognition of occupied Jerusalem as the unified capital of Israel, on December 6th, 2017.

The soldiers also killed fourteen Palestinians, and Injured hundreds, including many who suffered serious conditions, since Trump’s announcement.

On December 6, 2017, one child, identified a Mohammad Saleh Abu Haddaf, 4, died from serious wounds he suffered on August 8, 2014, when Israeli army drones fired missiles at his family’s home, and several nearby homes, in the al-Qarara town, north of Khan Younis, in the southern part of the Gaza Strip.