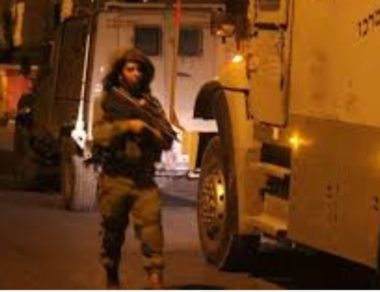 The Palestinian Prisoners’ Society (PPS) has reported that Israeli soldiers abducted overnight and on Thursday at dawn, nineteen Palestinians, including one woman and two children, in several parts of the occupied West Bank.

The PPS stated that the soldiers invaded and ransacked dozens of homes across the West Bank, including occupied East Jerusalem, and interrogated many Palestinians while inspecting their ID cards.

The soldiers also installed many roadblocks across the West Bank, especially in and around Hebron, in the southern part of the West Bank, before stopping and searching dozens of cards, and interrogated scores of Palestinians while inspecting their ID cards.

Among the invaded areas are the neighborhoods surrounding Qalandia refugee camp, north of Jerusalem.

Furthermore, the Israeli army claimed that a Palestinian hurled a grenade at an army vehicle, during an invasion into ‘Azzoun town, east of Qalqilia, in northern West Bank, causing no injuries.