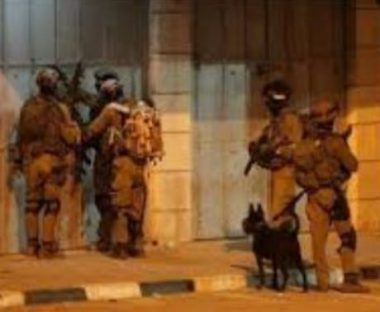 The Palestinian Prisoners Society (PPS) has reported that Israeli soldiers have abducted, overnight and earlier Monday, at least ten Palestinians, including a child, in different parts of the occupied West Bank, and injured five Palestinians near Jericho, including one who suffered serious wounds.

The Hebron office of the PPS, in the southern part of the West Bank, said the soldiers invaded and searched many homes in the Hebron district, including the city itself, and abducted seven Palestinians.

In Bethlehem, the soldiers abducted a child, identified as Mohammad Ibrahim Abu Yabes, 15, and summoned two others from Doha town, west of Bethlehem, for interrogation.

In Tulkarem, in the northern part of the West Bank, the soldiers abducted a man, identified as Hussein Nawwaf Jallad, 40.

In Nablus, also in the northern part of the occupied West Bank, media sources have reported that clashes took place between dozens of soldiers and local youths, after the army invaded the city, and stormed dorms for female students.

Furthermore, the soldiers invaded al-‘Oja village, northeast of Jericho, and clashes with local youths, who hurled stones and empty bottles at the military jeeps, while the soldiers fired live rounds, gas bombs and rubber-coated steel bullets.

Medical sources said five Palestinians were injured, including one who suffered serious wounds before he was moved to a local hospital.