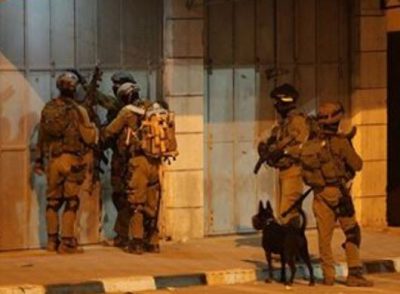 The Palestinian Prisoners Society (PPS) has reported that Israeli soldiers invaded, on Tuesday at dawn, the West Bank districts of Hebron, Bethlehem and Jenin, stormed and violently searched many homes, and kidnapped seven Palestinians.

The Hebron office of the PPS said the soldiers invaded many towns and communities, in the district, broke into and violently searched many homes, and kidnapped five Palestinians.

In addition, the soldiers invaded Bethlehem, and kidnapped one man, identified as Tamer Issa Salah, 27.

Another Palestinian, identified as Salah Fares Salah, 19, was kidnapped from his home in Jenin, in the northern part of the West Bank.

Also Tuesday, the soldiers assaulted several Palestinians while picking their olive trees, in their own orchards, north of the northern West Bank city of Nablus, and chased them out of their lands.

On Monday afternoon, the soldiers kidnapped18 Palestinians, including 10 children from a school for orphans, and the school’s headmaster, in occupied East Jerusalem, and three in Ramallah.