Israeli Army Kidnap 15 Palestinians, Including 10 Children, In Jerusalem, And 3 In Ramallah 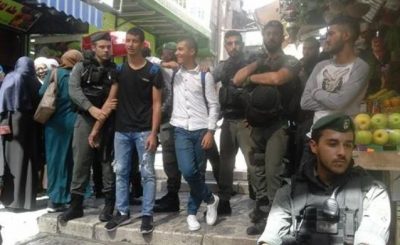 The Palestinian Prisoners Society (PPS) has reported that Israeli soldiers have kidnapped, on Monday afternoon, 15 Palestinians, including 10 children from a school for orphans, and the school’s headmaster, in occupied East Jerusalem, and three Palestinians in Ramallah.

Eyewitnesses said the soldiers chased many children while leaving a local school for orphans, and invaded its campus, in the Old City of Jerusalem, assaulted many of them and kidnapped ten.

The Israeli army claimed that some students hurled stones at their vehicles, and at soldiers stationed near the main gates of the Al-Aqsa Mosque.

The Wadi Hilweh Information Center in Silwan (Silwanic) said the kidnapped children have been identified as;

The school’s headmaster, who kidnapped from the school campus, has been identified as;

The soldiers also kidnapped four young men in Jerusalem’s Old City; they have been identified as;