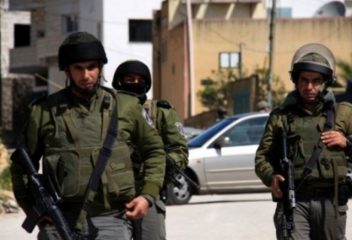 Israeli soldiers kidnapped, earlier Monday, at least seventeen Palestinians in different parts of the occupied West Bank, including one who came under fire of an armed Israeli paramilitary settler, before the soldiers abducted him.

The Jerusalem Office of the Palestinian Prisoners Society (PPS) said the soldiers broke into several homes in the occupied city, and kidnapped six Palestinians.

The soldiers also kidnapped Netham Abu Ramouz, from his home in the al-‘Ezariyya town, southeast of Jerusalem, and Mohammad Abu Esbeitan from Beit Iksa village, northwest of the city, after storming and violently searching their homes.

Also in Jerusalem, soldiers and fanatic colonists stormed the courtyards of the Al-Aqsa Mosque, attacked many Palestinians and kidnapped two, identified as Adel Abu Zneid and ‘Aahed Rezeq, before taking them to a nearby interrogation facility.

The attack into the courtyards of Al-Aqsa was carried out through the al-Magharba Gate, when several small groups of soldiers and settlers started flooding the holy site after removing the Muslim worshipers.

Furthermore, a paramilitary Israeli colonist opened fire at a Palestinian truck, driving on bypass road #60, east of Hebron, before the soldiers stopped the truck driver near Khirbit al-Majnouna area, south of Hebron, and kidnapped him.

Eyewitnesses said the Palestinian has been identified as Hisham Mahmoud Abu Ayyash, from Beit Ummar town, north of Hebron.

In addition, a Palestinian child was injured after a colonist Israeli settler rammed him with his car, near the southern West Bank city of Hebron, and fled the scene.

The soldiers also invaded the northern West Bank city of Qalqilia, kidnapped three Palestinians, shot and injured another, and violently assaulted a woman.

The kidnapped Palestinians have been identified as Ala’ Wajeeh Abatly, his brother Anas, and Salim J’eidi.

One Palestinian, identified as Majdi Nizar Atatra, was kidnapped after the soldiers stormed and searched several homes in Jenin city, in the northern part of the West Bank.