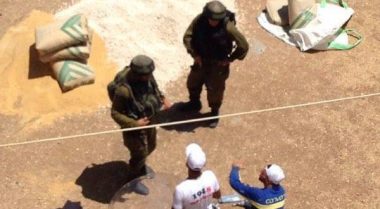 Israeli forces, on Sunday afternoon, broke into Aida refugee camp, north of Bethlehem, where they raided a cultural center and kidnapped a number of youth, causing clashes to erupt in the vicinity.

PNN correspondence said that soldiers broke into both the camp and Lajee’ cultural center, where they detsined four youth., two of which were identified as ‘Aahed Munther Amira (20) and Firas Nasrallah (26), both who work at the center.

The two were reportedly installing a new children’s game at the center’s garden area.

Clashes broke out in the camp following the break-in.

Israeli forces have been carrying out such raids on the camp and the center for about week, now.