Policing the Nakba: Points of Solidarity Between U.S. Citizens of Color and Israeli Palestinians 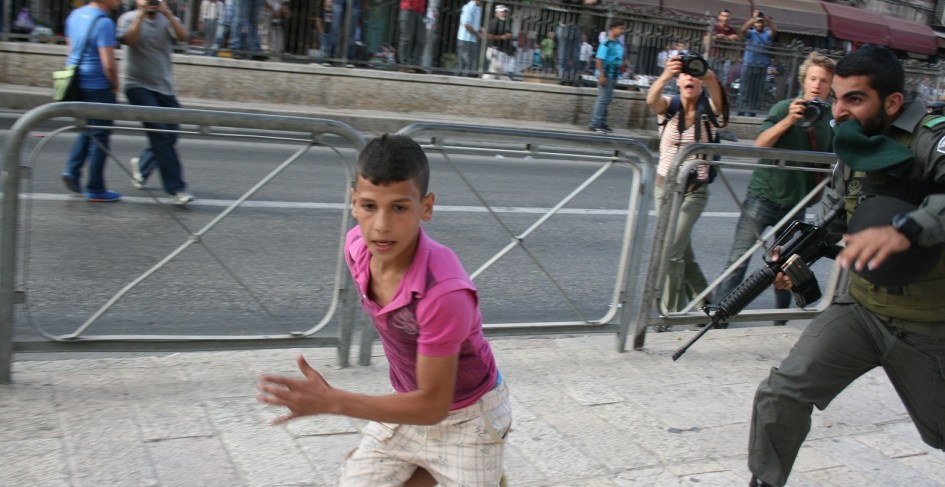 The transnational solidarity movement between Palestinians and Black, indigenous, and other minority Americans has made significant strides in promoting the struggle of Palestinians living under occupation in the West Bank and Gaza Strip. But in its justified focus on challenging Israel’s military regime as an institution of oppression, the movement — like many other outsiders — has sometimes overlooked another such institution that operates inside Israel itself: the national police force.

In fact, when delegations of American activists of color tour the region with a focus on visiting the West Bank, many find that their situation in the United States is even more accurately mirrored in the experiences of Palestinian citizens of Israel, who make up a fifth of the population within the state’s 1948 borders. The conditions of many Arab towns in Israel remind the activists of impoverished ghettos in American cities; segregationist laws in land and housing echo those of the Jim Crow south; and in particular, the stories of police brutality sound starkly like those in the U.S.

These acts of state-sanctioned violence, among many over the years, are coupled with both negligence and harassment by police in Arab communities. Policemen rarely arrive to investigate scenes of local Arab gun violence and, if they do come, are never heard from again. Plainclothes officers have been known to storm into local stores in broad daylight in search of undocumented Palestinian workers from the West Bank. Residents even remember how, years ago, newly-inducted Israeli soldiers stopped and searched vehicles at the entrances of Arab towns inside Israel as training for managing checkpoints in the Occupied Territories.

Israel’s police practices toward its Palestinian citizens illustrate how policies of repression and marginalization may derive not only from specific laws and legal tools, but from the absence of law too. In the U.S., black Americans have long criticized law enforcement authorities for primarily operating through two extremes: under-policing in issues where they are most needed, and over-policing in others for the wrong discriminatory reasons (a significant movement is even calling for the abolition of policing, rather than reform). For Palestinian citizens, the Israeli police work in a strikingly similar manner. Domestic abuse, gang wars, and traffic violations in Arab communities are largely ignored; terrorism, political protests, and crimes affecting Jewish citizens, however, are met with swift and severe responses.

The “absence of law” as a tool of discrimination is further reflected in how the Israeli authorities erase police liability for violence committed against Palestinian citizens. Despite extensive advocacy for the victims of the October 2000 killings, including the creation of the Or Commission and its report in 2003, none of the officers or officials responsible were brought to justice. Between 2011 and 2013, out of more than 11,200 complaints of police brutality and misconduct filed to the Police Investigation Unit (“Mahash”), only 2.7 percent led to the prosecution of an officer and only 3.3 percent led to disciplinary action. In two high-profile cases of police killings in recent years – Kheir Hamdan in Kufr Kanna in November 2014, and Sami al-Ja’ar in Rahat in January 2015 – Mahash allowed the policemen to walk free even though video evidence and testimonies clearly proved that they had unlawfully fired their weapons. 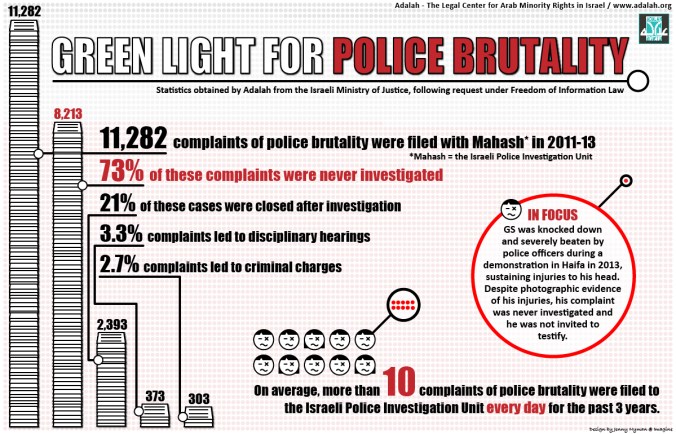 This police impunity is set to worsen in the years to come. In September 2015, the Israeli government approved new rules of engagement that allow security forces to open-fire on people who are so much as suspected of preparing to throw a stone. In June 2016, the Knesset passed the Anti-Terror Law which, among other things, grants the police more powers to arrest, interrogate, and punish citizens for simple political acts like waving a Palestinian flag or attending a protest, which under the new law can be interpreted as “support for terrorism.” This “militarization” of law enforcement – a trend that is also being witnessed in the U.S. – is allowing the police to increasingly enjoy powers previously reserved for the army and secret service, thus making citizens of Israel susceptible to the same repressive practices as those used against occupied Palestinians.

Police violence in Israel is nowhere near the scale and severity of that in the United States or in the Occupied Territories; but these phenomena all share key elements that achieve the same purpose. Through a combination of harsh law and no law, of brutality and unaccountability, state authorities are able to turn the bodies, towns, and neighborhoods of minorities and natives into spaces for exercising repressive violence. This is what allows the police to quell public dissent, arrest activists, and assert racial hierarchy, knowing that their actions will not incur any punishment. This is why despite numerous efforts by the Palestinian community to reform the police, the Israeli authorities still do not see Palestinians in the state as citizens to be served, but as threats to be contained. Black Americans understand this as a manifestation of racial supremacy. Palestinian citizens know it as enforcement of their Nakba.