Press Release: The 7th Annual Conference of “ Struggles for Freedom” 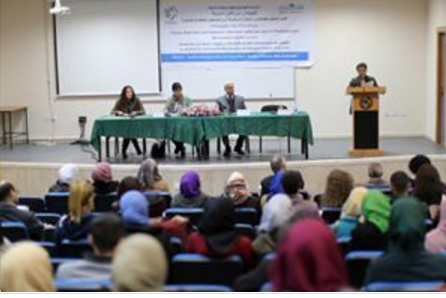 Dimensions of the Palestinian, Indigenous and third world liberation struggles and resistance were marked in the 7th annual conference of “ Struggles for Freedom” organized by the Institute of Women’s Studies at Birzeit University and the Arab and Muslim Ethnicities and Diasporas Initiative(AMADE).

The conference provides a comparative approach of the Indigenous, Black and Puerto Rican Liberation movements in the United States and anti-colonial resistance movement in Palestine, and explores the dynamics of subjugation employed by the colonial/ racist powers as well as the acts of resistance deployed by Natives, lacks, Latinos and Palestinians in their freedom struggles.

Prominent academics, social activists and supporters from the University and members in  the Arab and Muslim Ethnicities and Diasporas Initiative, shared their experiences, mechanisms of subjugations and offered a wide range of strategies for resistance.

Panelists analyzed the intersections of colonialism, racism and the regulation of gender and sexualities that resistance movements have had to confront, discussed ways and modes of resistance developed to combat the oppression of life under colonial racist regimes and examined strategies of dismantling and disrupting colonization, as well as strategies that create an alternative world through solidarity, cooperation, and collectivity that sustains and is sustained by the struggle of freedom.

“ Birzeit University was able to  flourish under the harshest of conditions, picking its fruit is always a collective effort and the product is extremely nutritious- Education was our tool in  Resistance”, University President Abdel Latif Abu Hijleh said.

“ We refuse to accept the criminalization of education and the oppressive tactics that are used against the university and the higher education system as a whole”, Abu Hijleh states. “ Israel can deny work visas to foreign academics or block international students from coming to study, in addition to the attempts to fragment Palestinians as Gazans find it very difficult to study in the West Bank. Nevertheless, we will learn, educate and continue to exist”.

Director of the Institute of Women Studies Eileen Kuttab said that the focus will be on the parallels, shared experiences, continuities and ruptures of incarceration as anti- insurgency as well as the counter resistances employed by prisoners movements in Palestine and the 3rd world countries.  “Social movements and activist standing in solidarity with Palestine can contribute in building a foundation of broader solidarity mobilization throughout Palestine and the world. It is an international responsibility to pay tribute on the heroic victories of prisoners and freedom fighters.”

“We are committed to standing firmly against racism and all  forms of oppression, and to working in solidarity with liberation struggles of people around the world against racism and occupation,” senior Scholar in  the Arab and Muslim Ethnicities and Diaspora Studies at San Francisco State University, Rabab Abdulhadi said. “Arab and Muslim diasporic communities have long been the target of cultural and political misunderstanding, discrimination, and misrepresentation. Our work is framed within a justice centered perspective that generates and advances a counter narrative that views Arab communities as communities of color within the US, in the Americas and across the diasporas.”

AMED provides an intellectual home to scholarship and analysis on pertinent issues affecting Arab and Muslim communities. Activists and scholars are engaged in critical and decolonizing work in the field, through documentation, analysis, and skilled pedagogy.