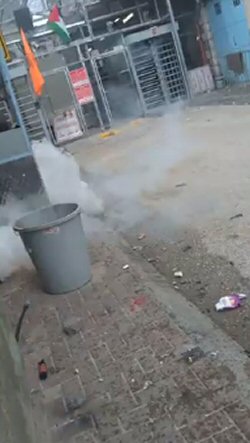 ISM and members of the press targeted and attacked with teargas and concussion grenades at peaceful protest in Al-Khalil (Hebron).

Peaceful demonstrators gathered at the checkpoint to the closed historical Shuhada street, asking for an increased international presence and for re-entry into Shuhada street.

Shortly after, Israeli forces escalated the demonstration with brute force, illegally entering the Palestinian H1 side of Hebron, attacking children with rubber coated steel bullets and grenades, and eventually kidnapping one youth.

This is one incident of many in the recent history of Khalil, in which internationals and observers are currently being targeted, intimidated, attacked and deliberately removed from the area.