Pressure Campaign Launched by US against Palestinian Administration, EU Responds 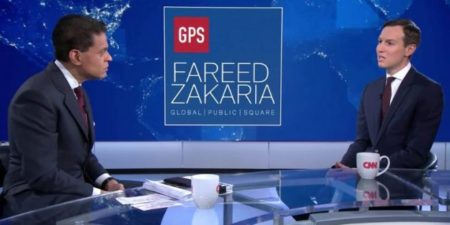 The US government has begun a campaign to pressure the Palestinian National Authority and President Mahmoud Abbas to accept the “Deal of the Century” launched by US President Donald Trump, in the form of criticism made by his adviser, Jared Kushner, adviser during an interview with CNN.

In the interview, Kushner threatened Palestinian leadership, saying that if the Palestinians are unable to fulfill certain conditions under the plan, Israel should not recognize them as a state.

Kushner also criticized the behavior of the Palestinian Authority, saying that Abbas “has served 16 years instead of four years, and this is not a prosperous democracy.”

Kushner said there were promises of a democratic Palestinian state, but there is something that makes him believe that with this program and the “offering,” there is no one and that this state and order does not exist and that there will be no such state.

“Page 34 of the plan states that the basic condition for recognition of this Palestinian state is that it will enjoy free press, free elections, freedom of religion, stable and transparent financial institutions such as the Western world, and an independent judiciary, and it is clear that this does not currently exist,” he said.

“He also states in the plan that the United States and Israel are the two countries that will rule if the Palestinian state meets these conditions, but I fear that there are currently no Arab countries that meet these criteria,” the US adviser said. Is this not a simple way to tell the Palestinians that you will never have a state?”

The European Union, in a statement, said that it was fully committed to the transatlantic partnership and values all efforts to help find a peaceful resolution to the Israeli-Palestinian conflict.

“The EU recalls its commitment to a negotiated two-State solution, based on 1967 lines, with equivalent land swaps, as may be agreed between the parties, with the State of Israel and an independent, democratic, contiguous, sovereign and viable State of Palestine, living side by side in peace, security and mutual recognition – as set out in the Council Conclusions of July 2014.”

The statement said that the US initiative, as presented on 28 January, departs from these internationally agreed parameters:

“To build a just and lasting peace, the unresolved final status issues must be decided through direct negotiations between both parties. This includes, notably, the issues related to borders, the status of Jerusalem, security and the refugee question,” it added.

The European Union called on both sides to re-engage and to refrain from any unilateral actions contrary to international law that could exacerbate tensions. We are especially concerned by statements on the prospect of annexation of the Jordan Valley and other parts of the West Bank. In line with international law and relevant UN Security Council resolutions, the EU does not recognize Israel’s sovereignty over the territories occupied since 1967. Steps towards annexation, if implemented, could not pass unchallenged, PNN reports.

The United States has requested a closed-door U.N. Security Council meeting for Thursday at which Kushner is to present the administration’s new plan, diplomats said, Al Ray further reports.

Kushner has requested a closed-door session on Thursday, during which he can clarify details of the plan and respond to questions from the UNSC’s other 14 members.

PA President Mahmoud Abbas is scheduled to be at the United Nations on February 11, to make his case against the U.S. proposals

In late 2017, a Palestinian-inspired resolution condemning Washington’s unilateral recognition of Jerusalem as Israel’s capital received 14 votes in the Security Council, but the United States quashed it with its veto.

Kushner is the architect of the plan unveiled by Trump last week, and rejected Saturday by the Arab League and by the Organization of Islamic Cooperation on Monday.

The plan proposed the establishment of a Palestinian capital in Abu Dis, a suburb of Jerusalem.

In a statement, Saturday, Israel’s Ambassador to the United Nations, Danny Danon, said he has launched a campaign to persuade member countries not to support any Palestinian action that is hostile to the US plan.