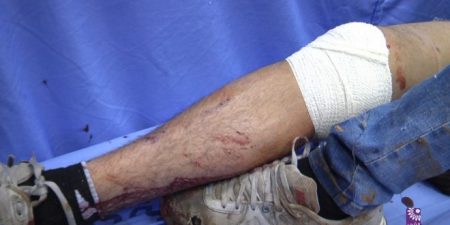 The Detainees and Ex-Detainees Affairs Commission stated, on Friday, that Palestinian teenager, Hussein Younes, who Israeli soldiers shot, wounded and detained, on Thursday, is in a stable health condition, according to the Palestinian News and Info Agency (WAFA).

The Israeli occupation authorities claimed that the youth allegedly attempted to stab soldiers, on Thursday evening, near the illegal settlement of Gush Etzion, south of Jerusalem, before they shot him and detained him.

In a statement, the Commission said that Younes was shot with live ammunition by the Israeli army, below the knee, and sustained fractures in his leg.

Authorities stated that a court session will be held for Younes without his presence.