Opinion: Israel’s Plans to Replace UNRWA Schools are a New War on the Agency 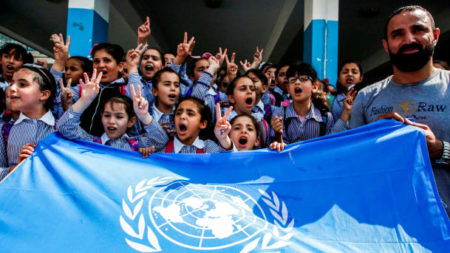 By Imad Freij for WAFA

Six UNRWA-run schools in Jerusalem are now facing the threat of closure, after the Israeli municipality green-lighted the establishment of a school complex affiliated with the so-called Israeli Ministry of Education as an alternative to the UNRWA-run schools, paving the way to end the operations of the international organization in the occupied capital.

Israel’s war on the UNRWA has particularly intensified since the US administration’s decision to suspend funding to the Agency in August 2018, with a view of preventing it from operating and providing educational, health and other services to as many as 110,000 Palestinian refugees in Jerusalem.

The latest Israeli announcement regarding UNRWA’s work in Jerusalem implies a message from the Israeli government to the United Nations, whose General Assembly recently voted to renew the Agency’s mandate. This necessitates a response from the international community to put an end to Israel’s disregard to international law, UN resolutions and all humanitarian laws.

About 1,800 students are currently enrolled in UNRWA schools in Jerusalem, including three schools in the Shuafat refugee camp alone, where 850 students study.

Speaking to WAFA, UNRWA spokesperson Sami Mushasha said the Agency has not yet been officially informed of any decision regarding its schools in East Jerusalem. He said the UNRWA has been providing its services in Jerusalem since 1950 as part of the mandate given to it by the UN General Assembly. Mushasha added that Israel is party to the Convention on the Privileges and Immunities of the United Nations signed in 1946, which protect the right of the United Nations to carry out its missions without any interference.

“The occupation’s plan to build schools that replace UNRWA schools in Jerusalem is a dangerous development that comes within the Israeli attempts to weaken the Agency and its presence in Jerusalem,” he told WAFA. “Israel has allocated large budgets for this purpose, and this issue is being used as electoral propaganda by the Israeli parties.”

Mushashah pointed out that the US’ decision in 2017 to move its embassy in Israel to Jerusalem and then suspend funding to UNRWA has emboldened the Israeli government to embark on ending the Agency’s operations in the Old City Jerusalem and in Shuafat and Qalandiya refugee camps, as well as in all the areas in Jerusalem where the Agency provides health and education services.

He pointed out that there are agreements signed with the Israeli government that protect the presence of UNRWA in Jerusalem, “and therefore if the Israeli side does not respect these agreements there will be legal ramifications.”

Mushasha stressed that the Agency pays special attention to Jerusalem and seeks to provide the best possible services in all areas of operations, adding that the stifling financial crisis that the Agency is going through has affected its work.

“We’re facing great challenges to maintain our educational services in Silwan, Wadi Al-Joz, Sur Baher, Shuafat and Qalandia refugee camps, but we are ready to face these challenges,” he concluded.

In the meantime, the head of the Refugee Affairs Department in the Palestine Liberation Organization (PLO) Ahmed Abu Houli said that the Israeli decision to ban UNRWA’s work and target Palestinian refugees in Jerusalem is part of the so-called “Deal of the Century”.

He said there are leaks confirming that the occupation is planning this year to terminate UNRWA’s work in Jerusalem, as the city remains at the core of the conflict after the city was illegally recognized as Israel’s capital.

He explained that the Israeli municipality’s plan to establish an alternative school complex for the Agency’s schools in occupied Jerusalem comes within the “Deal of the Century”, saying that the agreements signed between UNRWA and Israel can legally abolish this plan. “We are on the verge of a legal battle to thwart all of these plans”.

Abu Holi called “UNRWA” to put a sufficient budget to improve its educational and health services, in particular, in order to face the temptations promoted by the municipality of the occupation about the services it provides, in an attempt to empty the institutions of the agency.

Meanwhile, the Ministry of Foreign Affairs and Expatriates considered the Jerusalem municipality’s approval of this plan as a new step on the way to impose the Israeli curriculum and the Jewish character on the occupied city.

“This decision is not directed only against the Palestinians, but against the international community, in a blatant disregard to the United Nations, of which the UNRWA is considered an essential component,” the Ministry said in a statement.

Hanan Ashrawi, member of the Executive Committee of the Palestine Liberation Organization (PLO), also condemned the plan as “an extension of the Israeli establishment’s campaign of aggression against Palestinian rights and roots in the City… It is also an assault on multilateral institutions and international law.”

“This reprehensible plan also embodies the Israeli establishment’s disdain for the United Nations, rejection of Palestinian rights, and illegal actions aimed at altering the historic, cultural, and demographic composition of occupied Jerusalem,” she remarked.

“Despite Israel’s fervent efforts to smear and incite against this important organization, UNRWA’s mandate was recently renewed by the vast majority of UN member states. Obstructing the work of this UN agency is unacceptable and illegitimate.”

She concluded, “The Palestinian leadership will endeavor to prevent these hostile plans from materializing and we call on all states to defend the mandate they approved for UNRWA’s continued and unobstructed operations in all its fields of operation.”