Eight Palestinians in Jerusalem Receive Summons to Appear in Court 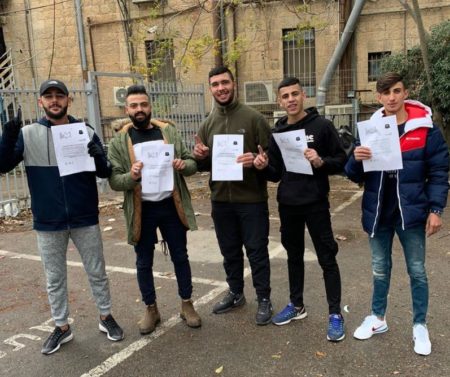 Anwar Obeid, one of the summoned youths, said that police and security services invaded his family home, early Saturday morning, and handed him a summons to appear before the Jerusalem District Court Sunday, adding that seven other young men of his neighbourhood were also summoned by the police for the same reason.

Israel invoked an emergency act from the pre-1948 British Mandate-era to impose night curfew on the al-‘Isawiya youths for periods ranging from two to four months.

The youths were detained last week for confronting the Israeli forces who invaded their neighbourhood, and were then released the next day under curfew orders during the night.

Obeid said police stormed their homes during the night to see if they had broken the curfew.

Local Palestinian residents participated, on Thursday evening, in a protest activity against imposing night curfew on their neighbors and sons.

Over the last several months, al-‘Isawiya’s 20,000 Palestinian residents have been subjected to daily harassment and brutality from the Israeli forces.

The Israeli army regularly storms the neighbourhood, mainly at night and early morning, harasses students going to school, and fire tear-gas canisters at homes at all hours of the day.