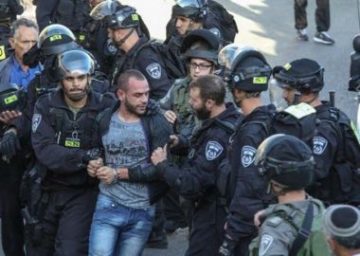 The occupation forces arrested 6 Palestinian young men from al-‘Isawiya, on the pretext of “breaking house arrest” imposed on them, Ma’an News reported.

Thursday night, the youths announced their rejection of the nightly house arrest decisions imposed on them, under the British emergency regulations 1945, on the pretext that they participated in “confrontations.”

The young men asserted their right to move freely without restrictions or unjust decisions and laws, by staging a sit-in in the late hours of Thursday, in al-‘Isawiya, in defiance of the occupation orders.