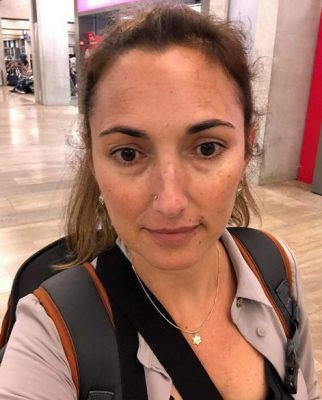 Ariel Gold, a member of Code Pink for Peace and an outspoken proponent of the Boycott, Divestment and Sanctions (BDS) movement in the U.S., was detained at the airport in Tel Aviv, Israel on Sunday, and was denied entry and sent back to the U.S.

The movement that Gold is a part of, the Boycott, Divestment and Sanctions (BDS) Movement, is aimed at pressuring Israel economically to get the government of Israel to adhere to its obligations under international law and signed agreements.

She has been a prominent and outspoken proponent of Palestinian rights, and despite her deep ancestral connection to Judaism – her family can trace its lineage back to 16th-century Rabbi Yosef Caro, author of the “Shulchan Aruch” (the codification of Jewish religious law), who is buried in Safed, Israel – the Israeli government has deemed Gold to be a ‘security threat’.

Though she has never broken Israeli law, and is steadfastly committed to nonviolence, the Israeli government considers her political views to be a threat – essentially charging her with a ‘thought crime’ for critiquing Israel’s policies.

Gold had been told the last time she left Israel that she would need to notify the Israeli Ministry of the Interior the next time she came to Israel. She obtained a student visa to study Jewish Studies at Hebrew University, and notified the Ministry of Interior as they requested.

But despite that fact, she was deported and her passport stamped with a denial of entry, after 8 hours of interrogation and detention at the Ben Gurion Airport.

Her student visa was canceled and the Minister of Interior Arye Deri weighed in on the case personally, stating, “Gold has distributed videos on social networks, in which she harasses IDF soldiers and Border Police officers in Hebron, accusing the soldiers of apartheid and oppression, and that their actions do not conform to Jewish values”.

With this statement, the Interior Ministry made clear that the reason Gold was denied entry was the ‘thought crime’ of criticizing Israeli policies and practices.

Gold stated that the Israeli officials who denied her entry gave her only one reason for her denial of entry, that she “lied about her reason for entry”. Gold adamantly denied that claim, saying that she was planning to participate in a course at the Hebrew University in Jerusalem on “collective memory in Israel.”

The Israeli Minister of the Interior stated, “I am again using my authority to prevent the entry into Israel of a woman who came to act against Israel and call for its boycott. This is a Jew who tried to abuse this fact. Those boycott activists must understand that the rules of the game have changed. [They] will no longer be allowed to enter the country to harm the state and its residents.”

The Minister’s statement continued, “The policy I have set is clear: Whoever consistently acts to boycott Israel will not enter here. The rules have changed, and the State of Israel will not restrain itself against those who try to harm it.”